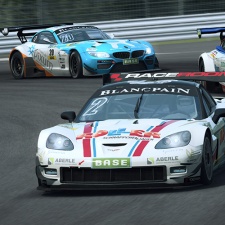 As the name suggests, this is a woman-only racing competition, that is being held at the European Women in Games Conference in London.

The aim here is to encourage more women to get into eSports by creating a female-friendly environment. A slice of the revenue from this event will be going to ‘female-focused charities’.

“Around seven per cent of our race competitors are female. Unbelievably, that’s probably over average. We want to see more women enjoying the thrills and spills of the virtual track, and eSports in general. At SimBin we’ve achieved 50/50 gender balance in our studio workforce, so we thought we’d try to encourage more women to compete in our competitions too.

“We spoke to Marie-Claire Isaaman (CEO, Women in Games) and Dr. Jo Twist (CEO, Ukie), who both thought it was a great idea. Then we got positive feedback from some well-known car manufacturers and a host of great sponsors and advocates got on board. Everyone could see that Women and Wheels is all about doing good while feeling good. It’s got high-octane racing fun, it’s building a supportive environment for women to develop their racing skills and confidence, and it’s donating to charity too. It’s a real game changer.”

Women in Games CEO Marie-Claire Isaaman added: “Women and Wheels is a fantastic initiative. It’s a shame we need women-only teams, leagues and competitions in Esports but until the sector fully matures, becomes more gender balanced and takes steps to eradicate online bullying and misogyny, they represent a great way to get more women involved by building communities, confidence and skills. It’s not true that women aren’t competitive, or that they don’t like cars. The CEO of General Motors is currently a women, and the founder of Autoweek, Denise McCluggage, used to race Ferraris! Esports has great potential to level the playing field for women in competitive sport, and I think Women in Wheels is progressive step towards achieving that.”