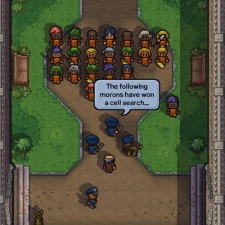 The sequel to indie hit The Escapists launched Steam last week, but some players aren’t happy.

The game features a procedural generation system for creating its prisoners, with some characters named after YouTubers and streamers such as DanTDm and JackSepticeye. Personalities such as Jim Sterling appeared in the first game, so this isn’t exactly unprecedented, and influencers did contribute to that title's success.

But – as spotted by Kotaku – the comments were not favourable to this content, with some users straight up asking Team17 and developer Mouldy Toof to axe the YouTuber content.

Publisher Team17 has admitted that these personalities appearing quite as much as they have, and has already released an update to address this concern... which has prompted some users to demand YouTubers appear more.

The Escapists launched last week and debuted at the No.3 spot in the Steam Top Ten.