The Escapists 2 debuts in third place in Steam Top Ten 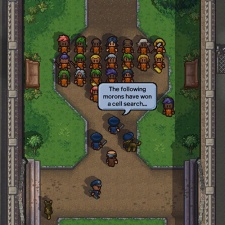 Playerunknown’s Battlegrounds is still of the Steam ranks, but we have a new entry in third place.

Codemasters latest F1 game debuts at No.5, while Bethesda’s Early Access shooter Quake Champions starts off life at sixth place. That’s not the only title from Bethesda in the charts, either. The Elder Scrolls V: Skyrim Special Edition charted at seventh place, while Prey came in at No.8.

Pre-orders for the latest expansion for 2K’s sci-fi strategy game, XCOM 2: War of the Chosen, charts at ninth place, ahead of pre-orders for Total War: Warhammer II, which is set to launch next month.

Below is the Steam Top Ten for the week ending August 27th: