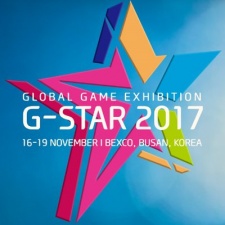 Steel Media, publisher of the Pocket Gamer brand, and G-STAR, the world-famous South Korean gaming event, this week announce their event partnership. The first joint activity will be a networking event in Cologne, Germany, on Tuesday August 22, for attendees at Gamescom. This will be followed by other activities including G-STAR as a major sponsor at PG Connects Helsinki in September, and a Big Indie Pitch evening at G-STAR itself in November.

Since 2005, the annual computer and video game trade show G-STAR has been a one-stop, easily-accessible gateway to the Asian market. South Korea is one of the most robust and exciting gaming markets in the world and G-STAR is the best way for Western games companies to experience it. This year’s G-STAR takes place 16-19 November (B2B 16-18 November) at BEXCO, Busan, Korea. It features conference tracks, a games industry job fair, exhibition areas including zones for each platform - including mobile and PC - an esports event, and more.

On Tuesday 22nd August, from 7pm at the Hyatt Regency Cologne Hotel, the two companies will partner to deliver a fantastic mixer event for the games industry. The party will start with an address from Mr Shin Chul Kang, the chairman of G-STAR, and a panel of big name industry figures delivering an East Meets West Masterclass, where South Korean, Chinese and Japanese delegates will discuss what the opportunities are in Korea and why Western publishers should look to go to Asia. Following the panel, the mobile mixer itself is the perfect networking event to end a busy day of conferencing and will include drinks and canapes. Free tickets are available here now.

PC Connects, alongside Pocket Gamer Connects and XR Connects will take place in Helsinki on 19-20 September, featuring mobile and PC talks and activities alongside VR, AR and MR. G-STAR will be participating at the event this year.

Mr Shinchul Kang, the chairman of the G-STAR organising committee and of K-Games, the Korean games industry association, said: "We are happy to broaden our cooperation with Steel Media’s Pocket Gamer events, after last year’s party at Gamescom in Germany. Pocket Gamer’s presence at gaming events around the world throughout the year, and their tight relationship with the global gaming industry, is a perfect platform for introducing the strength of G-STAR. Meanwhile G-STAR will promote the PG brand among the Asian game industry. We believe this cooperation will push both events even further."

Mr Chris James, CEO of Steel Media, commented: “G-STAR has long been one of our favourite annual shows and we strongly believe it represents the most accessible entry point to the South Korean and wider Asian games market. It's an essential date in our calendar and we are proud to be taking Steel Media activities, like the Big Indie Pitch, to Busan in November."