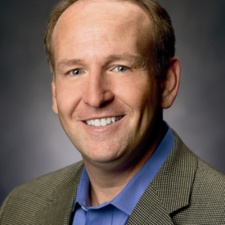 US retail giant GameStop is apparently on the hunt for a new chief executive officer.

That's according to Reuters, which reports that the firm is on the lookout for a replacement for current CEO, George Sherman (pictured). This is part of GameStop's move away from physical retail to becoming more focused on online commerce and comes in the wake of Ryan Cohen joining the company's board in January.

Cohen has apparently begun laying the foundation to shift the company strategy away from physical retail, which has seen huge declines in the last decade.

Recently, GameStop announced that chief financial officer Jim Bell was departing the company before reports emerged that he was forced out. Meanwhile, the firm has hired Amazon and Google vet Jenna Owens as its new COO.

These changes come in the wake of a wild start of 2021 for GameStop. The company was caught in a battle between short sellers from Reddit's r/WallStreetBets subreddit and financial institutions who were shorting GameStop stock at huge levels. What resulted was the stock skyrocketing in value from around $20 at the start of January to $347.41 at the end of the month.

Apparently, there are several TV and film adaptations of this story in the works.