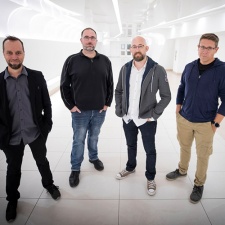 Former employees of French publishing giant Ubisoft and EA's BioWare studio have set up their own venture, Yellow Brick Games.

The new development outfit is going to be based in Canada's Québec City, and is being headed up by Ubisoft and Activision Blizzard veteran Thomas Giroux (pictured, far right), who holds the CEO role. Fellow co-founder include chief creative office Mike Laidlaw (pictured, second from left), formerly of BioWare, as well as COO Jeff Skalski (second from right), who previously worked at Ubisoft and EA.

On its website, Yellow Brick says that it wants to have a healthy working culture as well as wanting to create innovative and emergent gameplay. The firm also says its is an "equal-opportunity employer" and "strongly" believes that diversity is valuable to making good games. Right now, the team looks remarkably white and male, but here's hoping that the studio follows through on this promise.

"We want to emphasise a 'back-to-basics approach', centered on the pleasure of crafting new game experiences, in a flexible and more personable environment that an independent studio can provide," Giroux said.

Skalski added: "We have learned a lot from working on world-class, multi-year projects with thousands of colleagues and we want to take a different approach. Leveraging a smaller talented team where people come first, we will create amazing worlds and experiences for all others to enjoy. The market is moving fast, and we have no desire to play catchup and chase it when we can influence where it goes. These goals drove us to found Yellow Brick Games."