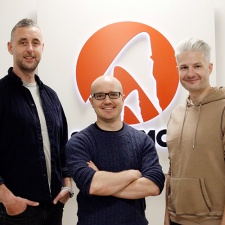 Swedish development studio Sharkmob is setting up a brand new outpost in London.

“Our plan over the next few years is to add another industry-leading studio in the heart of London, which is also close to some of the UK’s development hubs such as Guildford, Leamington Spa and Cambridge," Dobrowski said.

"Our new team will have unprecedented levels of creative freedom plus the full support of like-minded veteran developers back in Malmö. The London studio will fully embrace Sharkmob’s approach to studio culture and be encouraged to push boundaries in craft, expertise and creativity.”

Sharkmob CEO Fredrik Rundqvist added: “London is one of the greatest cities in the world and the United Kingdom has an amazing development community. We see London as a global city - with good national and international connections - and though 2020 has posed exceptional challenges to us all, as we look beyond these, - the UK will always be a key location for game development."

He continued: “A studio is nothing without the right people at its core and we want to do everything we can to find and nurture talent without letting location hold us back. I am very happy to welcome James and his talented team to the Sharkmob crew."

Sharkmob was founded in 2017 in Sweden's Malmo by veterans of Ubisoft's Massive studio, as well as IO Interactive. In May 2019, the company was bought by Chinese tech and entertainment giant Tencent for an undisclosed sum. We caught up with CEO Rundqvist at the time to discuss what this acquisition meant for the studio.