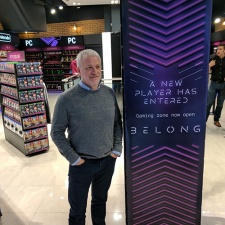 According to the Financial Times, the deal is valued at around $50m. The Belong brand was launched by GAME back in 2016, with these stores featuring esports arenas that consumers could go to in order to watch matches and take part in competitions.

Vindex has said that it plans to invest $300m in the Belong brand over the next five years and intends to open over 500 arenas in the United States as well as 1,000 locations around the world.

The deal also sees GAME Digital CEO Martyn Gibbs (pictured) departing the company to take up the chief exec role for Belong Gaming. Gibbs has been CEO since April 2012, when he was hired to help GAME out of administration.

He initially worked at retail chain Gamestation starting as commercial director in 2003 and moving to the position of MD in 2007 when the company was bought by GAME. From there he rose to become MD for the firm's UK, Eire, Scandanavia and Czech Republic businesses.

“The acquisition of Belong and Martyn’s leadership will allow us to bring the professional esports experience to casual and amateur players in their hometowns across the country and around the world, connecting more players everywhere at a time when communities truly need to be closer together,” Vindex CEO Mike Sepso said.

“Martyn is a true innovator and one of the most respected executives in the industry, with more than 25 years of experience, most recently as CEO of one of the world’s largest gaming retailers. We are thrilled to have him lead the next phase in our esports infrastructure strategy.”

Gibbs adds: “I am delighted to join Vindex and lead Belong Gaming as we continue the rapid expansion of the arenas. Since the beginning, the Belong team has been successful at creating a network effect for members. Belong’s renowned gaming arenas provide safe, inclusive community spaces where casual and competitive gamers can compete in organised grassroots esports tournaments, improve their skills, challenge other players and socialise with others who share their passion for gaming."