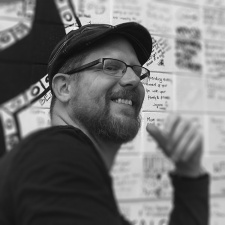 The Insurgency developer has been snapped up as the Canadian outfit's art director having not really worked in games development since he left Ph03nix New Media, where he was creative director and project manager, in January 2010.

New World has pinned Grills' hire on the fact that he's a veteran of well-known studio BioWare, but the artist hasn't worked there since 2005, having joined in 2000.

Since he left Ph03nix New Media in 2010, he's held roles at education firm ICOM Productions, and at, erm, 'social stock market' maker Empire Avenue, where he worked between October 2011 and October 2012.

This is all on top of his work at Union Illustration CO, where he has worked as a principal illustrator since 2005, working with clients including Google.

Grills has also had a career in education, working as an instructor since September 2016 at the University of Calgary teaching video editing and motion graphics on its Continuing Education. As of April of this year, he has been employed as a sessional instructor at the same educational institute.

“We're taking on a new, unannounced project which requires stronger artistic vision and leadership than games we've worked on in the past," New World founder and CEO Jeremy Blum said.

"Michael is a great fit for what we have in mind, bringing lots of creativity, industry experience and strong leadership to the table. We're looking forward to having him on board and are very excited to see what he's able to help us accomplish in the future for this project and beyond.”