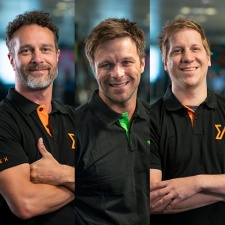 Cambridge game maker Jagex has made a number of creative and production hires.

Daryl Clewlow (right) comes on board as senior director of art having previously worked at Nordeus, NaturalMotion and Rebellion.

Meanwhile, Matt Higby (middle right) has been hired as design director having previously worked at Ubisoft's Massive Entertainment on projects including The Division. Prior to that he worked at Sony Online Entertainment.

“Jagex continues to attract and secure industry-respected talent and these are key additions to our creative and production management teams," director of game development Conor Crowley said.

"Our ambitions for both our current and new living games continue to grow and strong creative leadership is vital to realise these plans. Daryl, Matt, and Julian bring a wealth of experience, a breadth of talent in their respective areas and a drive to deliver excellent, immersive experiences to our growing player base.”

CEO Phil Mansell added: "This year we’ve accelerated our recruitment efforts to support Jagex’s growth plans. On boarding exceptional talent is a key element of our strategy as we extend the RuneScape experience on PC, prepare to bring the franchise to mobile, and invest in the creation of future living games.”

Some of these roles might be for the new titles in and outside the RuneScape universe that Jagex told PCGamesInsider.biz that it was hiring for.

Jagex hopes to expand studio headcount by more than 25 per cent by end of 2019, announces two senior hires