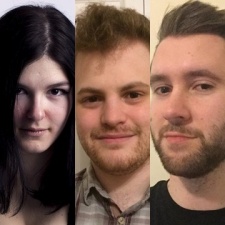 Steel Media’s B2B operations, which include our websites PocketGamer.biz, InfluencerUpdate.biz, PCGamesInsider.biz and The VirtualReport.biz, continue to grow at apace as we expand the number of sectors we cover, launch new sites (we have another incoming!) and extend our popular Pocket Gamer Connects conferences around the world.

So to help us grow, Louise Saul (right) has joined to write articles for PocketGamer.biz, as well as our other B2B sites that include PCGamesInsider.biz, InfluencerUpdate.biz, TheVirtualReport.biz and our exciting new website set to launch very soon!

She already has a wealth of journalism experience writing for media such as Vice, Comic Book Resources, Nintendo Life, MyM Magazine and Technology Networks.

She’ll largely be writing all about the PC games business, reporting to PCGamesInsider.biz editor Alex Calvin. You can catch her at [email protected].

Meanwhile, Iain Harris (above, far right) has joined the PocketGamer.biz team full-time to write the breaking news and big interviews all about the mobile games business. He has previously written for publications such as Esports News UK, VG247, Game Guiders, Edinburgh Evening News and others.

Got some news to share? You can catch him at [email protected].

PocketGamer.biz deputy editor Ric Cowley (above, centre right) meanwhile has been promoted to the editor of our consumer site PocketGamer.com. He’ll be leading the editorial direction there and shepherding in a new-look for the website set to launch later this year.

Ric has been with Steel Media for over two years and has worked across the company’s various sites in that time, including tips and reviews for PocketGamer.com, and guides and features for 148Apps.

Originally working as an intern at Steel Media, he joined full-time as PocketGamer.biz staff writer in October 2015 and has since worked his way up the ranks to news editor and then deputy editor.

Prior to Steel Media, Ric studied an English Language degree at Lancaster University and wrote for publications such as GamingLives and SCAN: Student Comment and News.

He’s been a fantastic writer for PocketGamer.biz and we’re delighted to keep such a talented individual in the Steel Media family.

“He's risen through the ranks and proved his worth with years of front line editorial on Steel Media websites, and he's ready to bring his expertise and experience to our flagship brand.

“Ric has sparkled as a newshound, feature writer and reviewer, and has impressed all at Steel Media with his maturity and ability. He is well known to the industry from his insightful mobile gaming criticism and his appearance at conferences. This is the perfect time for him to step into a leadership role as the team transition to a year of renewal and expansion. After a successful start to the year – January's sessions and pageviews were their highest for five months – PocketGamer.com is poised for its big relaunch this spring and Ric will shepherd the team towards that."

"Meanwhile, we welcome Louise and Iain to our B2B squad. It's always so satisfying to be able to bring new infusions of talent into the games press. These two writers represent the next generation of industry-facing editorial experts. Over the last 18 months, Steel Media has seen rapid growth in its .biz portfolio with three new sites join the renown PocketGamer.biz in our stable. We have another site launch on the drawing board too! Iain and Louise are already producing passionate, informed, analytical content to service the professional games community."

"We are recruiting a social media role and ad sales roles, so there are still opportunities at Steel Media if you know anybody who wants to hop on board before this train leaves the station!"

Steel Media CEO Chris James said: "I’m delighted for Ric, who has been a strong member of the editorial team for several years and will be awesome in the new role. There can be few editors in 2018 who know as much about mobile gaming, plus he's young, hungry and ready to light a fire under our market-leading consumer mobile games site and push PocketGamer.com to the next level.

“But we’re just getting started! Ric’s appointment, together with the addition of new writers Louise and Iain to the SM business network portfolio represent the first steps of what promises to be an exciting journey for the company in 2018.

“Building on the momentum of our best ever year in 2017 (capped off by the incredible PG Connects London which smashed through all our targets), we’re planning to invest in new staff and projects across both consumer and B2B sites and events, so expect to hear a lot more from us in the months ahead!

“Next up of course our gaze turns to the US, with our pitches and parties at GDC, followed by our second major show of the year, PG Connects San Francisco on May 14th and 15th.”