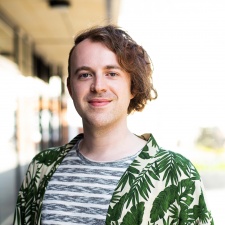 Today, we're speaking to Casey Blakeston-Lodge from TinyVoice, who submitted Pest Whisperer to The Very Big Indie Pitch at Pocket Gamer Connects London 2022 sponsored by Jagex Partners, and walked away as the runner-up.

Casey Blakeston-Lodge: I’m Casey, I have been studying at the Games MA at the National Film and Television School (NFTS), I put together most of the core team members at this time. They are made up of Lina Kalcheva (Art Director), Meirian Davies (Narrative Designer), Sam Rapley (Composer) and Dan Hibbert (Sound Designer) and Nikoleta Slezakova (Producer). I had a great connection with each of the members and felt like we were all very much on the same page in ideas. Creating a strange alien world was something each member was excited to take part in, it really opened up people's creative avenues and allowed them to really experiment with various ideas.

Tell us about Pest Whisperer that you pitched at the competition.

Pest Whisperer was the game I developed while studying at the Film School. The version of it that was pitched is still in development, with key features for the player to experience. This version more or less acted as a demo, featuring the main story and characters as well as some puzzle-solving, while leaving plenty of room for expansion to the story and environment.

What do you think are the most unique and interesting aspects of Pest Whisperer that gamers may never have seen before.

I would say a fair number of the individual elements of Pest Whisperer have been seen in some shape or form in other games, but for me, I feel it’s the combinations of certain aspects. A lot of time was spent on breathing life into the characters through animation, traditional and procedural, by doing this the vacuum ability the player uses becomes such a charming and funny thing to watch and play around with. The same could be said for the character movement with the tippy-tappy leg movement. The story itself and the player’s goals are an interesting combination that makes a fun and heartwarming experience about trying to find a place of your own and getting back on your feet after having a stumble.

Pest Whisperer is an incredibly cute light-hearted narrative puzzle game. What made you choose this genre, and what do you think you bring to it that may not have been seen before?

At the time of the game's conception, when we were all going through a difficult time all over the world, I really wanted to create something that would be uplifting and whimsical. I still really wanted to create an authentic experience for players where the conversations had a real humorous quality, while still being able to touch on some emotional moments between characters. The puzzle elements in the game were intentionally made to be accessible to players and get across the idea of helping both the clients with pest problems, and to rehome the pests themselves.

How did you come to choose the platforms that you would develop Pest Whisperer for?

Of course, Pest Whisperer is playable on the PC, I have been looking into the potential of porting it over to the Nintendo Switch. I honestly feel that the Switch and its current indie ecosystem fits the feeling and aesthetic of Pest Whisperer. I would want Pest Whisperer to reach the widest audience possible. These plans of course rely on development, expanding the Pest Whisperer into a full game and out of its current demo phase.

I can only speak from my experience, but I would highly encourage people to find good and honest peers to either work with or to just bounce ideas off. As amazing as it would be, great and fun ideas are rarely created in a vacuum; getting honest constructive critiques and working with those is where great value lies.

I was super excited to have been selected to take part in the pitching. It was my first time taking part, so there were some nerves very close to when it took place. I was pleased that I was able to take to the experience so quickly after it began, the judges I pitched to were great to speak with and had some insightful questions. Overall I would really recommend this to anyone who has the chance and wants to have a taste of what pitching can be like.

Taking part in the Big Indie Pitch has been so fulfilling. I was very surprised and grateful to have placed joint 2nd. I have definitely gained an insight into how pitching can be run, the types of questions asked and how interesting the back and forth between pitchers and the judges can be. As a first go at something like this, I can really see where my pitching could be improved and the way to present as well.

Pest Whisperer is a project that I’m very fond of and would love to continue development and bring it to a full release. The critiques and advice received are invaluable to pursuing that. I would love to continue making games that are on the whole playful, whimsical and strange. As work for Pest Whisperer has been my main focus for a while, taking some time to develop some of the seeds of ideas I currently have would be wonderful.