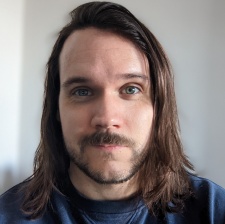 Today, we're speaking to Kyle Banks, who submitted Farewell North to The Digital Big Indie Pitch (PC+Console Edition) at Pocket Gamer Connects Digital #8 sponsored by our season sponsors Kwalee, and walked away with the third-place prize.

Kyle Banks: Farewell North is being developed by myself, with support from John Konsolakis who's composing the project, and Jo Ross who's lending her voice to the main character. I moved to Edinburgh, Scotland in late 2019 just before the pandemic, with lots of plans to travel the highlands but COVID quickly put a hold on that. All that travel inspiration was then redirected to what would become Farewell North, a game set in the Scottish highlands, and I was very lucky to meet talented Edinburgh residents such as John and Jo who have helped realize the game. The game is inspired by a number of beautiful and atmospheric games that came before, most notably Journey from thatgamecompany, and the mental health aspects of Hellblade: Senua's Sacrifice from Ninja Theory.

Tell us about Farewell North that you pitched at the competition.

The tagline is that Farewell North is a game about restoring colour to the world. More specifically, it's a third-person adventure through the Scottish Highlands where you play as a border collie travelling with your human companion, who's recently gone through a very traumatic experience, and your goal is to help her see the beauty in the world again as you complete this journey. The game focuses on ambience and emotion over "hardcore" gameplay, erring on the side of casual gameplay. It's definitely not a walking simulator though, as there are light puzzle elements and some monsters to evade, all focused on emphasizing how mental and emotional health can inhibit us.

What do you think are the most unique and interesting aspects of Farewell North that gamers may never have seen before.

Aside from the colour restoration mechanic which is generally the most attention-grabbing element of the game, I think what players will ultimately appreciate most about the game is the focus on the relationship between the woman and her dog. I'm not sure that particular relationship is something I've seen so intently focused on in a game before, and it really serves as the core foundation of the game.

Farewell North is a game all about exploration and discovery. What made you choose this genre, and what do you think you bring to it that may not have been seen before?

I've found as I've aged that I personally tend to find myself most engaged in this kind of game, where the deep story and emotional payoff are put before combat or intense gameplay. There are plenty of counter-examples to this, but generally speaking, I find the most rewarding games for me at the moment are in this category of exploration and adventure games, so to me personally it would feel dishonest to myself to try to make something else as this is where my enjoyment currently lies. As for what novel ideas Farewell North will bring to this genre, my hope is that the emphasis on the relationship between the two characters, and particularly seeing this relationship through the dog's eyes, will be something that players haven't experienced before.

How did you come to choose the platforms that you would develop Farewell North for?

In terms of the platforms Farewell North will launch on, it's mostly a pragmatic result of being a first game indie developer. I'd love to launch on all platforms and consoles from Day 1, but unfortunately, that's not realistic as getting console access can be a little tricky without a proven track record to demonstrate why those companies should give you access. So the focus is on PC to start, to prove there's an appetite for the game, and then to leverage that to get console access.

That was the plan anyway, but recently I have been having conversations with a couple of the console companies and it's looking promising that it may not be just PC, but I can't share more on that just yet.

In some ways, I feel unqualified to answer this as I work as a software engineer outside of the games industry 4 days per week in order to cover living expenses and have a safety net to fall back on. On the other hand, that does explain how it can be difficult to survive as an indie developer, as it's virtually zero-income until launch day unless you have a publisher (which you're giving up future earnings potential to), or have some smaller income sources such as YouTube or Patreon. The good news is if you're willing to work as you develop your game, the software industry is a great field to work in and I know a lot of software engineers who work full-time and make games on the side, so in terms of survival that's always an option.

My biggest piece of advice is pretty cliche at this point, but start small.

Since that's such a common answer I'll give one more which is to stop putting so much thought into what tools/engines/languages/frameworks to use and instead just pick one and get started. I think there's a lot of value in picking one tool, spending years with it, and really mastering it rather than switching around to whatever the hot new tool is. No engine is going to make your game for you, and it's very easy to get distracted by all the amazing tech demos, but the reality is that you need to spend a lot of time, years really, to master the tools and that mastery is going to much more valuable than the engine itself.

It was really fun. I honestly came out of the session thinking it was much more enjoyable than I was expecting it to be, and wanting to do more. I'm definitely an introvert and don't find it easy to put myself out there, but the format was so fast-paced and everyone was so friendly that I really couldn't help but enjoy it.

The Big Indie Pitch was my first public pitch session and the feedback I received was invaluable. I actually pitched a couple of weeks later at another conference and won, and I think that the experience at Big Indie Pitch really prepared me for that, and made my pitch deck that much stronger. I also made a few contacts with the judges and have carried on a few email chains since then, which may or may not result in anything, but it's just a great opportunity to make those connections.

I think every developer has plans for their next game(s), and I'm certainly no exception. There's an idea that I'm really excited to explore in a future project, but Farewell North is still such a joy to work on and really has a ways to go before I can really give another project any attention. I'm looking forward to what I hope will be a successful launch on PC, and perhaps a console or two, and listening to the community from there and seeing what they want from any additional Farewell North content, before moving on to any future projects.