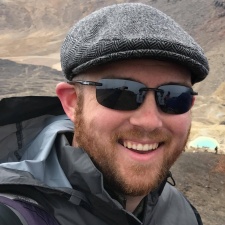 When GDC was postponed this month, we sadly lost the chance to hear from some of our favourite game makers. Indie creators Edgeworks were scheduled to deliver a talk about realism and accuracy in game design, but instead, we were able to Skype with co-founder and lead developer Alexander Winnto discuss his game and his theme.

Launched on mobile in 2017, TerraGenesis hit PC for the first time this year. From the start, it was a darling of those who like a pinch of authenticity in their video game broth, because it uses real NASA data in its design of our solar system. After its mobile edition picked up a bunch of accolades, including winning the Very Big Indie Pitch, stellar things are expected of its Steam edition. Winn told us why facts are needed amongst the fiction:

Can you give us a flavour and tell us what we missed at GDC?

Sure. One of the things that has been really interesting about TerraGenesis is that the game is based very heavily on real science. We use real maps from NASA for all the different planets in the game. We use real planetary stats. And I trace that back into other games. Obviously Kerbal Space Program derives a big part of its appeal from the fact that it’s based on real science. And then even things like Assassin’s Creed. Obviously you can play an Assassin’s Creed game just be in it for the fighting. But a lot of players enjoy Assassin’s Creed because they want to visit Revolutionary France or Renaissance Italy.

The talk that I was going to give at GDC was about this idea of using accuracy and realism to attract new audiences. If you roll out a new Halo game, you’re going to get all the Halo players. But if you roll out a new Assassin’s Creed game, you can actually draw in new audiences because they’re interested in Ancient Greece. This might be their first video game ever. We have a huge number of players of TerraGenesis who have never played another game, but they love space. So that was going to be my talk – how indie developers can leverage this to find new audiences by building in detail and realism into their game.

It’s a shame that we couldn’t hear about this in person. Do you think the games industry has faced many challenges from the coronavirus situation? Is everyone going to be playing more games because they’re stuck inside?
On the one hand, we’re already starting to see some games experience that “everybody’s locked inside” effect. Steam shattered its record for the most people online at any one moment and that sort of thing.

But at the same time, they may have less money to spend, because they’re not able to go into work, and the restaurants have closed.

Obviously it’s a terrible tragedy. If our industry turns out to be one of the industries that are not quite as hard hit, that would be lovely. But I think it all just kind of remains to be seen.

I expect that by the end of this, there’ll be a shift in how things work. We actually just had a meeting last week where a marketing person put forth a theory that what we’re going to see is a significant drop in in-app purchases, but a significant rise in willingness to watch ads, because people aren’t going to have as much money to spend, but they’re going to be sitting there with nothing else to do.

In 2020, TerraGenesis made the leap from mobile to Windows. What were the challenges involved in making that transition?
Well, the first challenge was just that I’d never made a PC game before. I had to learn the platform entirely. And then, of course, there are a bunch of standards that PC players have assumed. When a pop-up appears, you want to be able to hit “Enter” to dismiss it. And there’s no equivalent of pressing “Enter” on mobile, so we didn’t have that functionality.

It also opened up a whole bunch of conversations around the different play styles of mobile versus PC. For a mobile game, it’s sort of assumed that you play for three minutes, and then slip it back into your pocket, and come back later. Whereas a PC gamer has a certain understanding that they want to sit down and play this game. So that can sometimes alter how the gameplay needs to work.

We went through a whole bunch of different conversations. We actually added a few features and then took them back out, and had a whole bunch of discussions around what should change, and what shouldn’t. Ultimately what we decided was to basically ship the mobile version without too many changes. And then once it’s in the player’s hands, we can diverge from there, and start to differentiate it in a way that isn’t hypothetical.

Mobile games tend to be more snackable, whereas people tend to think of a PC game as a full meal. Are you able to give us any hint about how this version has been received on PC?
We’re just starting to rev up the promotion of it on PC. We did a roll-out and just waited to see what people thought of it. PC is a very intimidating platform from a developer’s standpoint because an iPhone is an iPhone. And there’s a little bit of a difference between an iPhone 10 and an iPhone 11, but it’s a very tightly controlled ecosystem.

Android is a little more fractured, and a little more varied. But again, you can sort of count on a certain level of consistency. But man, when you go to Windows, no two PCs are exactly the same. Everybody’s swapping out graphics cards and sound cards. There are all of these different points of variation, to say nothing of what version of Windows that they’re on.

So we did a roll-out where we put it on the store and waited to see how people responded. And they had been responding really well. There were a couple of bugs on Windows that weren’t on mobile, just because of the different ways that the platforms worked. So we’ve been fixing those. And we’re about to start revving up our UA campaigns and really starting to get the word out there.

So how do you onboard players who love science but might be playing a game of this sort for the first time?
One of the things that’s really nice about TerraGenesis is what I’ve been referring to as “Goldilocks gameplay”. In science, a planet that’s too cold is no better than a planet that’s too hot. It has to be right in the middle. And likewise, the difficulty curve of TerraGenesis is dynamic, based on player action.

The faster you move, the more likely you are to overshoot your goal. But if you’re slow and methodical and deliberate about it, then you can just move toward your goal in a much more precise way. So it self-calibrates. We don’t really have to worry too much about players getting lost, or players thinking that the difficulty is too high, because the difficulty is really set by their own actions. When we were designing the tutorial, we walked through what can be assumed that they know, and what we need to introduce them to as a new thing.

And the real science of it all is not presented as real science, to be perfectly honest. We never actually point to the map of Mars and go, “This is really the map of Mars. Isn't that cool?” You could theoretically play this game, and not actually realise how much real science there is in it. Just like you could play an Assassin’s Creed game and not actually release that the characters you’re talking to are historical figures. And that reduces the barrier to entry a little bit.

You can read more about the mobile edition of TerraGenesis and what’s been added in the latest updates over at our partner site PocketGamer.biz.