How Semaeopus is approaching hacking and crowdfunding with Off Grid 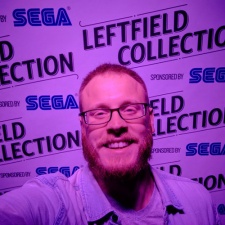 Having worked as both a metal worker and a technical artist for film and TV, Rich Metson found himself moving into video games development in 2010 with his first game jam. He is now working at Semaeopus, the studio he co-founded with Pontus Schöntberg and Sarah Asberry. Today, the firm rolled out its crowdfunding campaign for hacking title Off Grid.

We caught up with Metson at Gamedev Camp Lisbon recently to find out a bit more about this interesting project.

What's the pitch behind Off Grid?

Off Grid is a stealth and hacking game where data is your most powerful weapon.

The game avoids combat in place of stealth and deception with the use of hacking tools and ingenuity. You play a technophobe single dad, Joe, who is oblivious to the world’s prying and spying, corporate-sponsored government until a series of dark events unfold. We have based the game around a contemporary storyline that mirrors real-world events surrounding data privacy, and have forged what we feel are some fairly unique gameplay mechanics that allow you to manipulate the world and people around you with the data they unwittingly leave behind in their use of networks and 'smart' devices.

Your motivation is simple: your tech-savvy daughter, Jen, has been forcibly taken from home by government agents in a simultaneous dawn raid, apparently targeting a group of seemingly innocent technologists. It is within this dystopian surveillance state that you must take begrudgingly take up the guidance of an anonymous contact to figure out how to game the system undetected and unravel the conspiracy surrounding these unfortunate happenings and get to the truth.

Hacking in video games isn't particularly new - how does Off Grid differ to something like Uplink, Hacknet, Hackmud or Watch Dogs?

Well, Off Grid is interesting as it sits in fairly unique middle ground. Off Grid's hot take on hacking is that the player actually maps networks with their character's augmented reality glasses, physicalising data, so that you can see the trail of seemingly innocuous information the characters in the world leave behind them. You then use this as leverage against them to progress.

We have created a pseudo hacking realism, where principles of networking and device vulnerabilities underpin the mechanics, but we don't lean too heavily on explicit realism for the exact steps taken to perform an exploit, after all if you want the realism of popping boxes legally from your sofa, you can just download a CTF .iso (a virtual machine image from a Capture The Flag competition) from one of the worlds top hacker conferences and poke at it.

I'd say we're more about the drama and dry humour of hacking and hacker culture in the way Uplink is, even if the presentation is entirely different! We are more 'Hackers' than Mr Robot.

The game is heavily moddable even at this early stage. Why is this support so important to you?

The world of hacking, data privacy and mass surveillance is deeply complex, not just technically but culturally also. The game is about the real world stories that are happening all around us constantly, and we couldn't possibly keep up with them, modders can.

As a small team we knew we couldn't ever completely summarise this, and so decided the best way to do these subjects justice was to build a universe that starts to capture them, and let our audience shape and expand upon it with us. There will always be players who want more accurate technical simulation, and others who wish to talk about particular politics or issues in the narrative, we are hopefully building a toolset that allows people to go in both directions.

We don't have the budget to have the researchers and consultants Mr Robot does - millions per episode - but we are well connected to experts in these scenes, and our feeling is that if you make a game with an interesting theme or system moddable, the experts will naturally gravitate towards it.

What do you make of the PC games market right now? Steam has undergone some colossal changes, and there are some big players entering the market such as Kongregate and Robot Cache.

I'd say diversity is a good thing, the ways games are being sold is ever changing and only by having multiple platforms that cater to different niches can we really expect to keep up with this. Twitch and Discord selling games is an interesting concept too, we have taken to streaming and really feel the direct relationship with the community works well for us as we have a lot of complexity to dive into with our players. We're optimistic and look forward to seeing what comes.

Why crowdfund the game?

We have two main reasons for crowdfunding the game. Firstly to help cover the remaining development costs for art and sound. We have our core design and development costs covered, but crowdfunding will allows us to do more. We'll be able to expand upon the Off Grid universe with more interesting characters, environments and soundscapes.

Secondly, the campaign will allow us to go into open production, and follow in the footsteps of some of our mentors like Weather Factory. We have always been pretty open with development and this Kickstarter is an opportunity to get our community more directly involved via open production.

Its a huge amount of work but some unforeseen benefits of crowdfunding have been that it has allowed us to get our ducks in a row when it comes to presenting and making noise around the game. Its also been a real confidence boost for the team to have players excited and cheering us on.

EA employees are the victims of hacking on Twitter