Singularity 6: 'Our first project will be very far away from League of Legends' 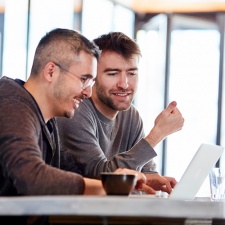 A fortnight ago, two ex-Riot Games developers, Anthony Leung and Aidan Karabaich, revealed that not only they had left the League of Legends studio and had set up their own venture, Singularity 6, but said organisation had just scored a $2.5m investment led by London Venture Partners.

We caught up with CEO Leung (right) and game director Karabaich (far right) to find out a bit more about the new studio and what the duo have taken away from their time working at the League of Legends maker.

Tell me a bit about your histories in development and how this studio came about.

When we first started talking about pursuing the creation of Singularity 6, we quickly found that we had a shared vision for the future of games, one in which games are looked at as viable sources of real, meaningful community and social connection. We know games have this capability, we’re here to build games that have community as a key focus for why they exist. After spending a large part of the year formalizing our vision, we built a stellar team of industry vets from Zynga, Riot Games, and Activision Blizzard. The team has worked on a variety of titles, including Destiny, Wildstar, League of Legends, and Words with Friends.

What's the thinking behind founding Singularity 6?

We are a gameplay-first, gameplay-focused company, which means we’ll prioritize creating deep, engaging systems for the players to interact with over trying to create a truly realistic representation of a virtual world. We believe that games have an incredible ability to bring people together and when we look at the current landscape of games, we see a lot of untapped potential. We want to build games that become a primary source of community for our players, as meaningful to their lives as a church community or being a part of a sports team.

What was your pitch to investors for your most recent funding round?

Making a pitch takes time, not because you need to make the most beautiful slides in the world, but because you need to understand your space deeply. Pitching the game comes naturally to us, but we also had to communicate the business potential, which required building models, collecting data and validating theories. We wanted to present a vision that was innovative but also had a sense of achievability and reason to believe. Ultimately, it was important to partner with investors who were visionaries themselves and we found that match in London Venture Partners.

The game described in the announcement press release sounds very similar to League of Legends - service-based, 'destination' title. What is the thinking behind this project?

Our first product will actually be very far away from League. We’re creating a game in the community simulation genre. So that means competitive play is not a focus for us.

What we are building is an exciting, virtual world for our players. And a key part of that world will be how we approach modelling out a virtual fantasy society and all the ways that players can influence and interact with that simulation. What role do you want to play in it? The answer is entirely up to you.

What learnings have you taken away from your time with Riot?

We’re trying to bring the best forward with us from all of the places we’ve worked in the past. Having a player-first approach and genuine care for your community are both key for us.

A lot has been written about the toxic working environment at that studio. How are you going to ensure that this isn't something that is carried over to Singularity 6?

Diversity, inclusion, and equal treatment are something we take very seriously at S6. We are creating a very inclusive workplace environment, and we want the studio to be a great place for talented people of every background. We are just getting started, but we have a lot of conversations about our culture and values, including diverse hiring and best practices. We believe diverse teams increase performance and help drive innovation; we’ll be pursuing aggressive practices to ensure that this is the case at Singularity 6.

What's the mid-term ambition for the studio?

We’ll be coming out of prototyping early next year and will be scaling up the team. One of the areas that we are spiking on is realistic characters in a living breathing world. We will need to create new tech and it will be challenging, but that’s part of the fun and helps us entice the best talent to join up.