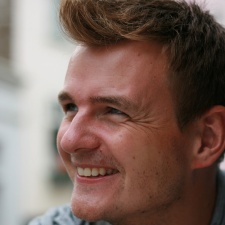 Indie developer Dan Marshall has done pretty well for himself during his career.

The award-winning game maker started life as a bedroom coder, working on PC indie titles like 'Ben There, Dan That', and 'Time Gentleman, Please', before going on to make comedy sex-ed game Privates for Channel 4. That last project won him a Children's BAFTA in 2012.

And it appears that Marshall's most recent release – 2015's prodecurally-generated steampunk loot-em-up, The Swindle – has been rather successful, too.

“The Swindle (pictured below) has done really well,” he says. “It mostly reviewed well and I get to see lots of videos of people loving it on YouTube, and that's really exciting. I'm aware it has its flaws, there's stuff I'm itching to do differently if I do a sequel, to really focus on the stuff it did well and tweak the bits that didn't work.

“I remember when it was at early prototype stage thinking: 'Haha, 50 per cent of people are going to HATE this'. I'm not sure quite a lot of people have the temperament for something ostensibly that punishing. The Swindle is actually very easy game if you walk away when you're ahead - it's your own greed that kills you. Turns out I was right – 50 per cent of people really do hate it.

“I think I'd rather make games that some people love than something that everyone agrees is fine.”

In fact, the game did so well in fact that Marshall has some extra cash to spare; and he wants to put this to good use by investing in a smaller project.

“I'd like to find a little project that could use a little leg up, whether that's funding for another six months of development time so it isn't rushed, or so they can afford an artist, anything like that,” Marshall explains.

“Anything that'll make a game with promise really sing. I don't know if anything'll come of it - finding the right game with the right team who need me is a long shot, but I'm keen to look.”

But what exactly is Marshall looking for with this investment?

He continues: “[I'm probably looking for] something that falls within my sphere of expertise - not necessarily by genre, more in that I feel I know what I'm doing as a one-man-band dev these days, so a dev with something great on their hands but could do with some cash and a guiding hand to make it into a success.”

Despite his aims to help fund smaller development projects, Marshall insists that this isn’t the start of [his studio] Size Five Games’ transition from developer to publisher.

“I'm not interested in more paperwork,” he admits. “I’m a dev and I enjoy my job. But if I can take a modest amount of cash and make it into slightly more cash by propping up a game I really believe in, that would be great.”

“I'd like to find a little project that could use a little leg up, whether that's funding for another six months of development time so it isn't rushed, or so they can afford an artist, anything like that,”

On top of wanting to fund other projects, Marshall is on the verge of releasing his next game, the... uh... 'football-inspired' Behold the Kickmen.

For those of you who spend a lot of time on Twitter, this might sound familiar. That’s because the game started out as a joke on the social media platform last year – but now it has become a focus for the indie dev.

“I saw a trailer for Super Arcade Football and decided I'd like to make a football game, as a joke,” Marshall recalls.

“I don't really know the rules and that was my strength, it was basically half-remembered Sensible Soccer, and that visual style and sense of humour appealed to a lot of people. It was a game jam that just sort of took off and I decided I'd better make it into something fully-fledged. I was hoping to have it done in a week, it's been a year.”

Unlike many of his other projects, Marshall was open about the development of Behold the Kickmen. This was largely due to the fact the game began life as something of a joke.

“Normally you want to keep things a surprise, you know? You want the people who paid for the game to experience everything fresh, you don't want to give it all away,” he says.

“But with Kickmen there was none of that, so the floodgates kind of opened and I just pushed everything up onto Twitter. It was a big silly joke and I was having a blast doing it. I had fun making Kickmen in the early days - it was dreadful code cobbled together to make something funny for gifs. It was only once I tried to wrestle it into a 'product' that things got boring fast and the menus and bug-fixing phase kicked in.”

And though Kickmen is yet to be launched yet, Marshall is already looking towards his next project.

“I'm hoping Kickmen goes down well enough that it's not a complete embarrassment, and after that I'm plugging away coding and designing, so you won't hear much of me,” he says.

“Hopefully by this time next year the next game will be up and running enough to show off, there's a lot of work to do before that.”