Devcom 2018 - Lessons from the making of God of War 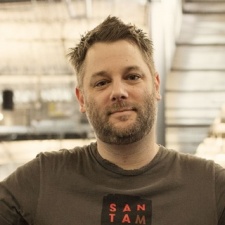 Right, so, yes, this year's God of War is a PlayStation 4 exclusive, but it's one of the highest profile releases of 2018 to date and there's a lot of lessons to be learned from its development.

Speaking today at Devcom as the show's opening keynote, Sony Santa Monica creative director Cory Barlog took us behind the scenes on this more refined and narrative-focused iteration in a franchise historically centred on murdering Greek deities.

Barlog said that it's important to just go for it when it comes to the talent that you want. Burned from his experience on the original God of Wars - when Hollywood and TV talent wanted nothing to do with video games - the developer said that he was reluctant to get in touch with Jeremy Davies to provide his vocal talent for God of War's antagonist Baldur. After trying to find other talent to fill this space, Barlog said that nothing was really working. So he decided to just get in touch with Davies to see about getting him on board.

"I wrote letters to several Swedish actors that I wanted to get into the game but lots of roadblocks kept coming up - scheduling, they weren't interested or didn't want to leave the country," he says.

"I thought about Jeremy Davies - we figured he wouldn't even talk to us, but we decided to just put it out there. It was then that I realised I had made a mistake - you should always, always, always pursue someone you want. You never have any idea whether it is going to work. I rang Jeremy for a 20-minute call and we ended up talking for two hours. At the end of that, he said we should work together because we both think creatively."

God of War is now seen to be a massive hit, selling in excess of five million copies in its first month on sale. But for a long time, it looked like the title was in some real trouble during development.

When Worldwide Studios head Shuhei Yoshida visited the LA-based developer to see God of War, he left horrified, telling a friend of Barlog that the game was just not up to scratch. For one, the frame rate was shockingly low, barely hitting 20 FPS which meant that players ended up missing their attacks half the time. So, Sony Santa Monica worked hard to get the basics right and the next time Mr Yoshida visited, he was much more confident in the project.

"Shuhei is playing - he's shaking his head a little bit. I got the feeling he wasn't having the greatest of times. He shook his head and walked out of the door," Barlog recalls.

"Shuhei never told me how he felt. He only told one of my friends who he saw at a party. He said: 'Oh, you're working on God of War? I just played it and I have to say I was horrified'. Horrified! Shuhei said he was horrified playing the game! He made another appointment to play through the game and I said immediately we needed to get it together. His horrified reaction forced the team to push and get that core loop down, get the frame rate back up. A huge problem was it was running at 20 frames per second which meant users were missing half of their attacks. Everybody had to rally together, not just the coding team, but the engine team, the rendering team and the art team. We had to jump ten steps ahead to get that one portion to work really well. In the end, it worked. He played the game... and the second time was not horrified. That was super good. The lesson was putting the difficult thing in front of you and not get comfortable. A lot of times you get confident but we needed to fail sometimes and be very uncomfortable."

To conclude his talk, Barlog said that the biggest lesson he had taken from working on God of War was never to give into doubt.

"The biggest, highest level thing I took away from this project is never ever give into doubt," he said.

"That is literally the worst thing that I have done but I thought I could compartmentalise it and pretend it doesn't exist. That is also stupid. Feel the doubt, process it, shut it down then move on."

Ten things we learnt at Devcom and Gamescom 2018