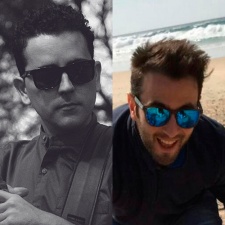 Crossing Souls from Spanish games studio Fourattic is pretty much the best case scenario for any indie developer.

The five-person team - formed of two artists and three programmers - released their debut game earlier this week. Crossing Souls is an 80s-themed role-playing game that was taken to Kickstarter back in November 2014. But thanks to content the studio had shared ahead of the crowdfunding push, indie publisher Devolver Digital was on the phone.

"We shared a lot of stuff on the internet when we started out and we made a Kickstarter, but before we had a chance to launch it Devolver saw some screenshots and emailed us and were like: 'This is not happening; this is impossible'," artist Daniel Benítez (right) says.

"They began working with us on the Kickstarter."

Fourattic managed to bank $51,983 from 1,752 backers, but says that managing a crowdfunding campaign is pretty challenging.

"Kickstarter is hard work because it requires a lot of effort and marketing," Benítez explains.

"You need to be in a situation where people know what the game is about in a short period of time. You have to think about the mechanics, the story and you need to package the whole thing into a trailer. You should also make a demo before the Kickstarter because it's really helpful to know you are able to make the game because some people make Kickstarter with trailers and not actual gameplay. We did a trailer with actual gameplay and later we found that it's really hard to be as good as the trailer. At the end, we put so much effort into that that the game is better.

"There is a lot of 80s influence. It's all missive - players who grew up in the 80s might enjoy the references, but we have seen teenagers playing the game and love the whole experience as well."

Yes, one look at the game and its 80s influences are clearly felt with Ghostbusters posters on bedroom walls and that neon pixel art that just evokes that time period.

Much like fellow 80s-inspired Kickstarter indie title Knights and Bikes, the timing of Crossing Souls is fortuitous given the popularity of Netflix drama Stranger Things.

"This game is all about the 80s. We grew up in the 90s in Spain and the 80s culture came later. Movies like ET came out in Spain about five years later," Benítez says.

"We think we've come at the perfect timing to show our game. But we started this game three years before Stranger Things. For us, it's not a game about the 80s in the style or in a superficial way. For us, we write the script thinking about how those movies were - the magic of anything being able to happen."

The 80s theming of Crossing Souls isn't the only retro element of the project - the title also features a really detailed pixel art style. When the game started development back in 2014, pixel art and indie projects went hand-in-hand. But what people expect from an indie game has changed dramatically.

Fourattic argues that doing pixel art - in contrast to what internet commentators say - is actually a real technical challenge and nowhere easy as gamers seem to think.

"Pixel art is really hard to do," Benítez says.

"Some people on the internet comment on our trailers saying how easy pixel art is to do. You have to make everything frame-by-frame. The environment is made point-by-point. It's really hard to do. We have bigger screens than before so we have to draw more to fill the space."

Programmer Alfonso Cueto (top far right) adds: "When you do pixel art, you need to care about the performance. To see the pixels move, you can't compress the texture. In a triple-A game you can compress it and have a lot of assets - in this game, you can't. At some point, you need to know how the game will be in terms of space. If you make a world so big, you need to factor that in when it comes to performance."

One final question for the Fourattic team - is there any worry that people might assume that Crossing Souls is a Dark Souls-inspired title?

"It's a concern," Benítez laughs, "but the game is totally different."