What happens when you combine Hearthstone, The Hunger Games and FTL? Meet Insane Robots 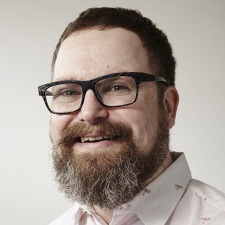 When indie developer Rob Davis from Playniac gives me the lift pitch for his latest project, Insane Robots, it certainly turns my head.

“We're saying it’s Hearthstone meets the Hunger Games, but also it's FTL as a card game,” he explains.

“We wanted something that was really easy to pick up, has these card battles at its centre that seem really simple but get more and more complex and strategic as you go. You're doing that in a world that is precisely balanced. You have to balance your resources really carefully to survive; you're fighting in arenas to be the last surviving robot.”

See? That’s quite the ambitious pitch – it takes the procedural generation from a title such as FTL for its level design, and marries it with a card-based battle system.

"The decks that we have are much simpler than most trading card-type games," he explains.

"We intentionally don't do collectable or purchasable cards; our game isn't freemium where you buy cards, it's a game that comes with everything you need to play it in the box. We have a smaller deck and have focused the strategy of the player and what you can do with all the combinations that come out of that deck.

“There's a maximum of 24 tokens [cards] that you end up with being able to play. That's a much more concise set that you're dealing with, and you don't customise that. You are able to alter your robot with what we are calling 'augments' and there are 100-plus of those in the game.

“You can change the probabilities of what might happen in the deck, the cost of moves, or your robot’s capabilities, but you can't change the deck itself.”

The game started life almost four years ago as a physical card game that Davis made in 15 minutes.

“It's creating an environment where you can modify, iterate and refine what you are doing through doing that. You can easily throw things away and change things. That's a process called iterative design. In this particular case, I very quickly made a deck of cards. Literally, I drew the deck on the back of some old business cards lying around and we were playing the game 15 minutes later. That was the start of a much larger design process.

“From the first idea of 'this could be a game', we had first playable so-to-speak. To do that in that length of time is unprecedented. You can't do that when you are programming games. My background is in programming; knowing how long things take in code, I've always reached towards those kinds of processes to shortcut and do stuff quicker. It's a valuable way to design.”

Obviously dating back that far, Insane Robots in many ways precedes many of the card games that have been released recently. But Davis says doing these sorts of games digitally can bring about some very compelling outcomes.

“There's been this this massive interest in [digital card games],” he says.

"We wanted to bring the structure of card games to digital strategic turn-based play and provide a really easy-to-understand mechanism. But also, digital can really innovate in ways you can't do with real cards.

“That's where these kinds of games have been really interesting.”

The random generation element – while also being an efficient, albeit not easy, way of making games – also allows developers to get more from a single project.

“Procedural systems can bring about a variety of stories and adventures,” Davis explains.

“We know that players play through our games and there are all sorts of tales they tell us about the things that they did to survive an arena or win a tournament that we didn't specifically design. That's their player experience and it's super exciting to see that naturally emerge from their time with our game.

"A lot of other games have influenced the systems that we've put into Insane Robots. I'm also influenced by the meticulous design in 868 Hack by Michael Brough. We sought to make perhaps a bigger adventure than he seeks to do in his games, because his projects are very systems-led, while still respecting that kind of depth of system.”

"In our games, you can always choose whether you want to explore or battle; you can choose to spend resources to make a situation safer or keep resources that win points at the end of playing a tournament. There are always these interesting decisions to make.

You can find out more at www.insanerobots.com.

INSIGHT - Why it's so important to nail video game key art