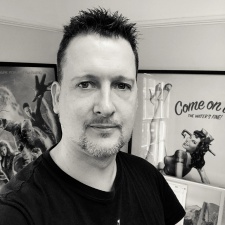 Narrative content creator The Same But Different has taken a step out of London to move into the heart of UK games. We spoke to creative director Andi Ewington to get a sense of what the Kennedy Monk side-studio has to bring going forwards.

Tell me about your company.

The Same But Different is a narrative and content division set up to work alongside our existing creative studio, Kennedy Monk.

TSBD is working with developers and publishers to bring story, lore, character and gameplay ideas to the table; then with our Kennedy Monk hat on, we use our vast design expertise to deliver everything needed to launch and support a game in the marketplace, from key art and trailers through to websites and fan kits.

At TSBD We believe that everything has a story to tell, a reason to exist, a part to play and a journey to make. Our goal is to build that narrative, filling the void with characters you’ll care about, villains you’ll love to hate, worlds you’ll want to explore and adventures waiting to be discovered.

TSBD has a dedicated team of experienced writers and concept artists, generating immersive ideas designed to resonate with your audience.

One of the biggest changes has been our location. After 15 years in the heart of the Soho (the archetypal home of the creative agency), we've taken the plunge and moved our studio to Guildford; home to some of the biggest developers and publishers in the UK.

At least half of our work now comes from oversees, and a London address no longer has the same attraction. From a business perspective we’re crossing into some exciting new platforms and getting involved much earlier in the development process of a title.

The results have been incredibly well received, and it’s been a delight partnering with the Chicago team on such an auspicious brand... and who doesn't love tanks!

Additionally, we’ve run brainstorming sessions with some of our indie clients, honing gameplay and aligning it with a stronger narrative rationale. These sessions have proven to be fun and incredibly productive; the feedback from the developers has been positive to say the least.

With so many like-minded design agencies in the industry, it’s difficult for a client to choose one over another. That’s why we took the decision to create TSBD, as a narrative focused agency we have a wealth of writing credentials and experience, which are hard to surpass.

We may only be in our infancy, but we have already secured several exciting projects, and there’s more on the horizon.

From esports and VR through to MMOs, single-player experiences and interactive audio adventures skills, there’s a huge demand for deeper and more narrative driven content. It’s encouraging to see this trend growing; not just in the games industry, but in the broader sectors too.

This year is going to be all about establishing ourselves as the go-to agency for developers and publishers alike. We aim to build upon our incredible pedigree and bring together the skills and expertise which have served us and our clients so well for the past 15 years.