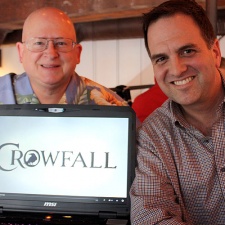 Coleman as the creative director on MMOs Shadowbane, Wizard101 and Pirate101; and Walton as vice president and executive producer at both Maxis, managing the Sims Online, and at Sony Online Entertainment for Star Wars Galaxies. Walton was, later, co-studio general manager at BioWare Austin for Star Wars: The Old Republic, among other previous roles. Their new game is in development by ArtCraft Entertainment, a company founded in 2013 by the two.

Crowfall is remarkable as it was the first game project to achieve over $1m in backing in 13 months on crowdfunding website, Kickstarter. An important feature of the game is that players can lastingly impact upon the virtual environment. Coleman and Walton tell us that the MMO games industry landscape had previously become somewhat closed to the development of innovative concepts, because of the impact of a certain title…

“In 2004 something happened that changed the way MMOs were made permanently and that was World of Warcraft (WoW) launched,” says Coleman. “Historically, in other game genres, when there's a really big win, that basically defines: this is the thing people want in this genre, and, therefore, the way all of them are made.

“Eventually they figure out the right way to do it. That's what happened with WoW. All of a sudden we went from the biggest MMO out there having 400k players to some ridiculous 12m number. … There was a lot of money poured into a lot of big projects, that fit the description of 'WoW, but with ‘blank’.”

There was a lot of money poured into a lot of big projects, that fit the description of 'WoW, but with ‘blank’

But Coleman reflects that this industry trend was, in some ways, counterproductive, and stunted developers’ creativity in this field.

“I think it was wrong to assume that there was only one right way to do it, and if you could copy that then you would get the same results,” laments Coleman. “The sad part of that is, before WoW, there were a lot of other interesting features that we, the creators, the designers, would all experiment with. The lesson learned from WoW was to try and dampen that down and homogenise the experience so that players don't have as much reliance on other players. Allow the player to be self-sufficient enough that they don't really need to interact with other people unless they really want to. It became a massively multiplayer single-player game.”

“The sad part of that is, before WoW, there were a lot of other interesting features that we, the creators, the designers, would all experiment with,”

“There were all of these interesting experimental things that were done, that died on the evolutionary tree,” says Coleman. “So when we got together and talked about what kind of company we wanted to make, that was number one.”

Crowfall has, therefore, been designed with it in mind not to have the homogenised experience or WoW-mimicking as some of its predecessors. Coleman explains that he and Walton drew inspiration from the concepts in Coleman’s earliest MMO game, Shadowbane, for Crowfall; but have no intention to replicate that previous project’s gameplay.

“Shadowbane had some really great ideas and, being my first game, had some really bad implementation,” laughs Coleman. “I mean, I don't sugar-coat it, we made a lot of mistakes. But there's some interesting ideas that had not been attempted again since Shadowbane. ‘What if the world is dynamic? What if the players can actually make an impact upon the game world that causes a ripple-effect and affects all these other players?'”

Coleman provides examples of standard mechanics in MMOs, such as enemy monsters eventually resetting after having been killed and NPCs offering the same quest to multiple players, but questions: “What if it's not like that?” He describes how, in Crowfall, the impact of one player can have a lasting effect in the game.

He continues: “Crowfall still is persistent, the difference is that players can actually affect the world in meaningful ways. I can actually go in the middle of nowhere and I can start to build a castle. You can't do that in WoW, you can't just decide: 'I'm going [to] build a castle right here.’”

“I can actually go in the middle of nowhere and I can start to build a castle. You can't do that in WoW."

The developers have described Crowfall as 'the MMO you can win' on the title's website.Coleman stresses the importance of this winnable MMO aspect of the game and makes reference to Risk and Civilization as examples of winnable strategy games which influenced it.

“Because the world we know is going to end with a victor, we also know that that map is not intended to live forever,” says Coleman. “We can let the players wreck the place. It's like having a party in a hotel that's going to be demoed in three months; who cares!? Let 'em wreck it; we don't give a shit. … That's the basic idea, there's campaigns that people can win.

As the game is still in development, the full extent and variety of the ‘Campaign Worlds’ is not yet known, however, Coleman finds the changeability of building these parts of his MMO service very interesting: “Experimentation being a core part of the live game service is a fascinating thing for me, because that's not usually the work. Usually, I get one shot and make a best guess at what the rules should be and then we put that out. If I'm right, we win, and if I'm wrong, we're screwed.”

It could be argued that there has been something of an MMO renaissance recently. Bossa Studios’ MMO sandbox game, Worlds Adrift, is in closed beta testing; Lazarus, by Spilt Milk, is a top-down action sci-fi MMO on Early Access. Both titles are using the Improbable SpatialOS development platform. Also, interplanetary sci-fi sandbox MMO Dual Universe is in pre-alpha testing, as of September 30th, and is developed by Novaquark.

“It feels very much like the first generation of MMOs did. When we were all trying crazy things,” says Coleman. He continues: “It is a renaissance. I think it will be great for the players and the industry, but we should also be ready for some fallout, because it's inevitable.

“It is a renaissance.”

Walton has a different outlook on this renaissance, and interjects: “I think that ‘renaissance’, also, is the right word because it's a bunch of smaller games being built. There's no five big companies who are saying: 'Yeah, we're in this deal and we're making that stuff.' In fact, they're all out, and that means that it's a great blue ocean.”

“I'm really excited to see how many of the guys who were around during the first generation of these [MMOs] are back to do it again,” states Coleman. “You've got Mark Jacobs doing Camelot Unchained, you've got Brad McQuaid doing Pantheon, you've got Richard Garriott doing Shroud of the Avatar. You're seeing a lot of the same faces resurfacing; coming back to have a chance to do that game that [was] like their first love, or that game that they always really wanted to do. That's amazing; to be able to go back and do that dream project and take another shot at the one that got away.”

Artcraft has secured $20 million in funding for MMO Crowfall