Has Shadow cracked cloud PC gaming with its Blade tech? 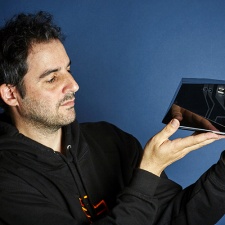 So, stop me if you've heard this one before.

There's a young company that thinks that its little cloud computer box can replace your gaming PC. Sounds familiar? Well yes, France's Shadow is walking in some well-trodden ground, following in the footsteps of the likes of OnLive, Gaikai and GeForce Now to name but a few.

The firm has also done pretty well for itself. Founded in late 2015, the firm has already managed to raise more than $70m in funding.

Despite its focus on PC gaming, Shadow's inspiration was actually in mobile games. CEO and founder Emmanuel Freund used to work for a company called Doro, and decided to build a smartphone designed for old people. Quickly the challenges and limitations of building such a device became apparently; people want this tech to be super powerful but also super small, two things that rarely go well together.

So, this got him thinking.

"We decided it was much easier to not put things inside of the smartphone, but put things outside," Freund explains.

"If you put everything in the smartphone outside, you have a great smartphone that can last two or three days; it's super thin, costs $100 and is ten times more powerful than a Samsung. That was something we should try. We look into it and decide to show it was possible. We're big gamers so we decided that the best thing to do was have a super computer, not a low-level one, but a real super high-end one, and see if we could do the same thing with a super high-end PC."

The team began work on this new hardware, and was soon told that such a device was not possible to create.

"We have a lot of experience in design and hardware. We start to think about how we can do this and design some algorithms and stuff," Freund says.

"We started to show it to investors and shareholders from our former company and the best developers we knew. Everybody told us it was impossible, that you cannot have the same experience as a local computer as with a cloud computer. You cannot send a 4K image on the network we have now, you cannot have something with latency."

In order to prove that their tech was legit, Shadow devised an A-B test. The team had people try out their laptop and a $300 laptop to see whether it was possible for them to differentiate between the two.

"At the start, they started browsing the internet or doing work they could not differentiate between them," Freund says.

"They could not see the difference between latency and colours and such. For them, it was the exact same computer. Then we showed us doing photoshop on a big image; the $300 computer could not do anything and is taking ages to do anything. The other one, the one that is cloud-powered, was doing blur and everything on a 4K image. Everything was super smooth. Then we took it to the next level; we launch a benchmark tool and it shows that one is a $4,000 computer, one of the best in the world. That's why we managed to raise our first round of funding really fast. Investors were looking at that and we built our first demo and alpha six months after."

All of this does sound too good to be true. But during our interview, Freund demoed Rise of the Tomb Raider on the hardware - the game stuck to a smooth 60fps with a 4k picture and no noticeable errors. This was on terrible Gamescom convention wifi, too.

Inside the box there is pretty much nothing. The only real hardware to speak of if an AMD accelerated processing unit, which is tasked with decoding images sent from a cloud server and sending back inputs from the user. That's it.

This set-up means that consumers will always be getting top end hardware. Users subscribe, paying a minimum of $29.95 per month, with hardware changes being made at the server end, rather than the hardware one.

If you look at the games market, consumers normally change computers either when something is breaking, or you want a better GPU or CPU," Freund reasons.

"You have a box with nothing inside. Well, no, you have a big APU from AMD that is able to decode 4K in 60fps and full HD in 144fps. The only goal of this hardware is to code the image fast enough to be able to display the image and to send back player responses. Aside from that, there's barely anything inside. You don't need to change that really. It'll change when we have 8K, but that's not today. You can just change the box. When 8K comes around, we'll change that around for the user.

"Since it's a computer by subscription, we'll change your box when you need a better one. The real thing is in the servers; the GPU, the CPU - all the hardware is there. Basically, it would change because we will change it. When you have every year or so, you have a new GPU and CPU generation. We'll change over when that happens; nothing changes or the user. A pop-up will come up saying the specs have changed. No update, nothing. It's as easy as that. That's why we call this your last computer - it'll always be powerful enough and fast enough to play any game in a super high resolution."

Such tech is entirely reliant on internet infrastructure. This was a concern for Shadow, as it says this is more or less the only thing it has no control over. But Freund claims that his tech works on low 10mb/s connections.

"At the beginning, we were really frightened by the network," he says.

"It's one thing we really can't control. We decided that we should sell this product for really super high network connection, like fiber only. But actually now, we have lowered the need to less than 10 mb/s. It's quite working with a lot of ideas electrically now. There are multiple things that have come into the calculation. When you talk about cloud computing, people think you have latency because the server is at point A and you are at point B, so of course the time to go from A to B is quite long and that's why you have latency. That's wrong.

"The main issue for normal gaming is the time it takes to acquire the image and to encode it. Normally you have 50ms on average to acquire the image in usual cloud gaming or computer. That's where the real latency is normally. If you have a great fibre connection, then you are five or six ms one way. Compared to the 50ms, that's not a lot. You have two things that are adding to this; on the network, you have the fact that on ADSL you might be quite far from the server or have a bad connection at your end, that's not good. We can't control this and this can harm it. If you have a good connection and, again, on ADSL with 10mb, then you will not see the difference with a normal PC."

Freund is pretty optimistic about Shadow's future; something bolstered by the firm's success with the financial world.

"Computers haven't changed a lot in the last 20 years. Of course, they've become smaller and more powerful. You have laptops instead of desktops. It's all about shrinking the stuff inside the computer as much as possible. Suddenly you have a computer that is super small that is generating no noise, that is super powerful and not boiling hot. You have a $2000 desktop computer, but it's not taking much electricity or making noise. And you don't need to change it. It'll never break; if some hardware breaks at our end, you'll be connected to another one. It will always be available. You can access it from anywhere."