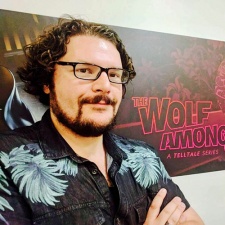 Telltale Games is maybe one of the luckiest game developers out there.

Having made a name for itself with its The Walking Dead series, the team has had the chance to work on a variety of top-notch entertainment properties. It’s adapted big-name film properties like Marvel’s Guardians of the Galaxy, the biggest name on TV in Game of Thrones and even the video game behemoth that is Minecraft.

Last year it even started making a licensed Batman game. That debuted in 2016 and ended this year. But Telltale, not wanting to lose momentum, decided to surprise announce and release a second series this year.

“We took a cue from Nintendo in how it does its Direct broadcasts,” creative communications chief Job Stauffer says.

“We’ve hit this point where we have enough fans now of Telltale, whether they're fans of one franchise or two or maybe they're just a fan of Story Mode or Batman. At Comic-Con we announced three comic-based series that we're putting out in the next year, kicking off with Batman: Season Two, Wolf Among Us and Walking Dead: Final Season next year.

“Batman was a surprise 'it's debuting in a month' announcement, which is rare to see in the games industry these days. Especially for us having completed the first season earlier this year, to roll on to a second season with all the creative momentum from the team just going forward and all the ideas and story elements we set up in season one with John Doe and the Joker and rolling right into season two, where it takes place about a year later. It felt right. The team was passionate about it and the fans really wanted a second season. The stars lined up and here we are.”

That wasn’t the only big announcement that came out of Comic-Con earlier this year; Telltale also revealed that its The Walking Dead series would be coming to a close in 2018. The comics which they are based by Robert Kirkman have been going for 14 years now, so there’s clearly longevity to them. But Stauffer says there’s a reason it is ending its version of the series after ‘just’ five.

“The comics have been going on now for well over a decade. While I don't know how and when they're going to end, we know that our friends at [Kirkman’s entertainment company which licenses The Walking Dead] Skybound do have plans for it to end at some point.

“For us, we love the universe and we love working with Skybound. We have set up this story with Clementine in 2012 that we feel players deserve to have an endpoint for. We could theoretically keep on going for ten more years and 20 more seasons but at what point does that start to wear thin and when are we going to lose the magic and the charm of what people love about this story of The Walking Dead and this character Clementine. It's a rare sacrifice. We don't see a lot of games where we're willing to put an endpoint to something to make sure it's still meaningful.”

Telltale was also behind an adaptation of the popular Fables comics. The Wolf Among Us launched in 2013 and was a real hit with fans. But a troubled development coupled with the company taking on more projects meant that it’s taken until now for gamers to get the next chapter in that series.

“We never really got to talk about what was happening behind the scenes before the Wolf Among Us premiered,” Stauffer says.

“The truth is that when we announced in 2011 we were making a game based on The Walking Dead and Fables comic, that was before The Walking Dead show had come on and become really big. Between that and Fables, when Walking Dead hit we were working on Fables in the background. We had gone through so many revisions of content that we had just thrown out, at a certain point it was almost more of a comedy and not a good one either.

“We reached a point just before E3 2013 where we had some content that didn't feel right. The project almost never saw the light of day. Oftentimes it takes that, whether it's a developer or any other creative endeavour to get to that point where you feel like no matter what you do it's just never going to feel right until the team really rallies and figures out that last piece of the puzzle to really tie it all together and really make it sing. It's tough to say what that was - the music or some total revisions to the script that got it feeling like something we have never played before. For whatever reason, it just worked. By the time we hit out finale in the summer of 2014, we never could have expected that fan would have liked it so much and that the critical response would have been so great, or that it would win awards.

“Frankly it was a huge financial success for us as well. We didn't anticipate any of that. By the middle of 2014, we had committed to doing some more projects: Tales from the Borderlands, Game of Thrones, Minecraft: Story Mode... it didn't make sense to do a second season of Wolf Among Us right away, especially as we didn't want to continue the story directly from where the moments left off at the end of the first series. That was specifically meant to be an ending that was open to interpretation and we wanted the fans to discuss how they played their story and what their thoughts were on who was who for the end of that story. We never wanted to pick up where we left off anyway. It was femme fatale ending, not necessarily a cliffhanger that was meant to leave players thinking: 'What happens next?'. It was meant to leave them going: 'I need to go play that again and find out what's happening'. So to do a second season we knew we could take our time, we just never knew when. It seems like every announcement we've had in the last two years has been met with a lot of fan demand for Wolf Among Us. We've been really passionate about it and wanting to do it.

"2018 is the perfect chance for us to dive back in. We're looking at a lot of format innovations over the next 18 months - distribution changes that could be happening, in ways I can't go into detail on right now, but we think that 2018 is going to be as big if not bigger than 2017, and it's been our biggest year yet. With the first half of next year, we'll see the final season of The Walking Dead, and the second half will see the return of Wolf Among Us.”

Telltale today stands at around 400 members of staff, a small number when you consider the number of projects it is working on. But the team knows this, and isn’t trying to compete with the triple-A giants when it comes to games scope and quality.

“We built the studio from the ground up and it's been in our DNA to feel more like an interactive TV studio or animation studio,” Stauffer says.

“We're not devoting three years of time and resource to create an open-world environment where every building has an interior and an exterior and all the bells and whistles. Gamers aren't going to spend 60 hours of their live or spend $60 to play it. We're creating content for consumers from a different angle. We want people to consume our content a bit more like television. We want people to feel like they can play an episode in one sitting, but feel just as rich and indulged as if they had watched a film or a premium TV experience. The rate at which we are creating these interactive stories is proportionate considering how small we are compared to other games studios. It's really unheard of. It's something we've been a little humbled by to say outwardly. It's been brought to our attention that this year especially with so many episodes and our growth coming to the point where we are able to facilitate and produce this level of quality content where quality is still key. It's not about quantity for us. We don't see anyone else doing this at the size that we are and we are proud to do what we do. And, frankly, we're always hiring. If storytelling is your thing, check out our job site.”

The coming year will see Telltale innovate on what has become a bit of a tried and tested formula.

“It's really about listening to the fans and delivering on deeper, richer stories and more innovation,” Stauffer explains.

“We’re starting to innovate in our format more and more. Even in the first episode of Batman, getting back to mid-action decision making and deeper relationships with characters. Often our players feel they don't see the consequences of their decisions and it's hard to see that unless you're playing multiple times or you see them in later episodes. More innovations and implementations of stat screens and control schemes and things we'll be experimenting with for how our role-playing, dialogue and decision making are going to start to evolve over the next 18 months between series and episodes.

“Even our episodic release structure is subject to evolve soon. The next year will be more of what the Telltale fans have been wanting from us for the last three years, along with an evolution of what we have built over the last 13 years.”