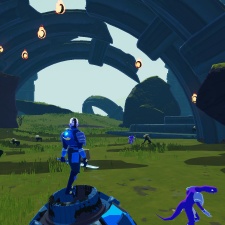 Gearbox is now the proud owner of the Risk of Rain franchise.

The news was revealed in a post on Twitter and follows speculation on the subject for several weeks. No figure has been placed on the deal as of yet, though developer Hopoo Games is not part of the acquisition.

"After years of passionate publishing work on Risk of Rain 2, we have developed a deep love and respect for the IP," Gearbox wrote.

"We are eager to prove ourselves as worthy custodians by continuing to bring you world-class content and ensuring a bright future for this genre-leading franchise."

This is part of a very big time for Gearbox. Following its purchase by Embracer, the company has recently grown to include Eidos Shanghai – rebranded Gearbox studio Shanghai – as well as taking Deep Silver's Volition under its wing.

Risk of Rain made its debut back in 2013 before a sequel launched into Early Access in 2019. A 1.0 version was released the following year.