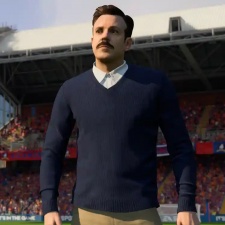 The titular character of Apple TV's Ted Lasso is coming to FIFA 23 alongside the fictional football club he manages, AC Richmond.

The news comes in the wake of rumours that Lasso – played by Jason Sudeikis – was going to make an appearance in the game after a picture was shared on the show's social media of him having his likeness captured.

Lasso will be a manager option for AC Richmond in FIFA 23's Career Mode, while fictional players Roy Kent, Jamie Tartt, Sam Obisanya, and Dani Rojas will be available in Online Seasons.

“I am truly fortunate, and deeply grateful, to have had many special moments in my career thus far, and I consider this experience among the best of them,” Sudeikis said.

“As long-time fans of FIFA, having Ted Lasso and the whole AFC Richmond squad incorporated into the newest version of the game is truly a dream come true for myself and the rest of the fellas. Our cast and crew work tremendously hard on this show, and we are flattered that it resonates with so many folks. We look forward to our fans having the opportunity to play with, play as, and even play against their favourite AFC Richmond characters.”

VP of brand over at FIFA, David Jackson, added: “In a short time and with limited prior experience, Ted Lasso has become a cultural phenomenon, bringing the passion of football and the power of belief to life for millions of fans across the globe. We're thrilled to welcome both Ted and AFC Richmond to FIFA 23."

Earlier this year, EA ended its partnership with football organisation FIFA and will be rebranding its franchise to EA Sports FC.