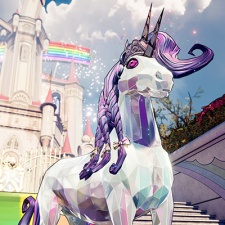 Another week, another Epic Games Store timed exclusive making its debut on Steam.

This time around it's Borderlands spin-off Tiny Tina's Wonderlands from developer Gearbox Software and publisher 2K Games, which charted at No.3 during its first week on Steam. This follows its initial PC release on the Epic Games Store in March of this year.

The No.1 and No.2 slots once again went to Valve's Steam Deck and Final Fantasy VII Remake Intergrade, respectively. In fourth place is Raft from publisher Axolot Games, which made its debut in June 20th, and currently has a 15 per cent price cut for its launch.

Monster Hunter Rise dropped one place to fifth, while pre-orders for its upcoming DLC Sunbreak charted at No.7. Sony's God of War returns to the Top Ten in sixth thanks to a 20 per cent price cut due to the Steam Summer Sale. Rounding off last week's charts are Rust and the Game of the Year Edition of Sekiro: Shadows Die Twice in ninth and tenth, which both saw a 50 per cent price cut.

Rust also reappears in the charts at No.9 with a 50 per cent discount,

Here is the Steam Top Ten for the week ending June 25th: