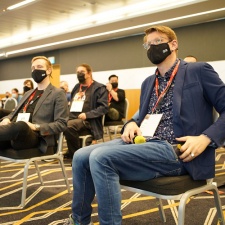 PCGamesInsider.biz had the pleasure of attending the event in person and seeing the Top 22 candidates, each with a chance to be chosen for the final Top 10.

In order to apply for GTR, a studio’s games need to be at least 60 per cent complete with a working demo or have already soft-launched their game.

The GTR team spends nine months selecting candidates and a further three months narrowing down the potential studios they believe are at an appropriate stage to work with.

Out of the pool of applicants, each year GTR selects its Top 10 studios and provide funding and additional support to bring the development process to its next level.

If studios reach important milestones, GTR will invest an additional $60,000, bringing the total investment to $100,000 each.

The Top 10 studios selected at the conference each are eligible to receive a $40,000 investment directly from GTR to give them the extra push needed to launch their titles.

Following the investment, GTR begins its six-month accelerator programme and three months of publishing support. If studios reach important milestones during the nine-month period, GTR will invest an additional $60,000, bringing the total investment to $100,000. Around 60 per cent of Top 10 studios reach these milestones and move forward with GTR.

When the time comes for additional investment, GTR will lead the seed round, opening up its investment partner networks to studios and will potentially invest up to $300,000 into the studio for its marketing or next project.

Here's what we learnt from seeing the games chosen for the programme...

Aaron is the News Editor at PG.biz with a lifelong interest for the games industry and a penchant for mobile rhythm games.