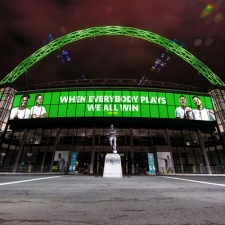 The partnership will see the Big M's branding appearing on both the male and female squads, the eLions esports team and Wembley Stadium.

Xbox is also rolling out a campaign called Firm rolls out 'When Everyone Plays, We All Win', whose aim is to create a more welcoming and inclusive atmosphere – for all genders, ethnicities, sexuality, faith or age – within the football scene together with The Football Association (FA).

“At Xbox we strive to remove barriers and to empower people to experience the joy of play: millions of people around the world find common ground and connect through playing games, as they do with football,” said Xbox director of global partnerships Marcos Waltenberg.

“In The FA we see a tremendous organization which has the same drive and ambition to empower people as we do at Xbox. Through our partnership we aim to bring further value to the England Football Teams and power the dreams of players and fans everywhere.”

FA commercial and marketing director Kathryn Swarbrick added: “We are delighted to be partnering with Xbox, a brand that aligns with The FA’s values. Gaming is loved and embraced by fans across the world, and we see this partnership as an opportunity to take that relationship to the next level for all of those connected with English football.

“’When Everyone Plays, We All Win’ is a message that rings true of what we strive to achieve at The FA and we hope that our inspirational national teams can bring great value to Xbox.

“As a not-for-profit organisation, commercial partnerships are vital in allowing us to continue to invest millions into all levels of the game, so we thank Xbox for that support.”