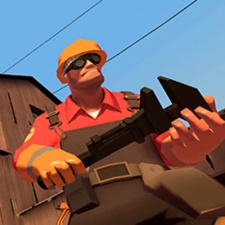 According to SteamDB – and pointed out by the site's creator Pavel Djundik on Twitter – the title boasted 151,253 simultaneous players at around 19:50 BST on Friday, June 25th. This comes in the wake of Valve making a few changes to hinder Team Fortress 2's growing and persistent problem with bots in the game. That's on top of some minor cosmetic additions.

Last year, the bots in Team Fortress 2 started to grow in number and, erm, racism. In June 2020, it was reported that racist bots were running rampant in the game at the same time that the Black Lives Matter movement was picking up around the world following the murder of George Floyd at the hands of police office Derek Chauvin. Valve introduced a fix to try and tackle the problem, namely by stopping new players from using chat.

Team Fortress 2 was launched back in 2007 as part of Valve's The Orange Box compilation that also featured Half-Life 2 and its expansions, as well as Portal.

Steam smashes concurrent user figure as 18.8m concurrent players logged in at once