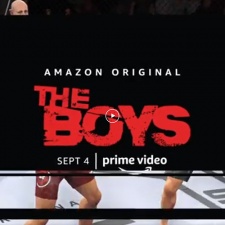 US publishing giant EA has had to remove adverts from its recently-released MMA game UFC 4.

The firm added in ads into the middle of matches, such as the one pictured for The Boys TV show, causing angry fans to take to Reddit to complain. UFC games have previously featured adverts, but normally these were only in menus and didn't disrupt gameplay.

Following the outrage, EA's community team responded to the complaints on Reddit.

"I’m part of the Community team here at EA and I wanted to post here and give you all an update on this situation," Corey "CoreySA" Andress, global lead for the company's, erm, 'community activation team' said.

"Earlier this week, the team turned on ad placements in EA Sports UFC 4 that appeared during the 'Replay' moments in gameplay. This type of advertising inventory is not new to the UFC franchise, though we have typically reserved displaying ads to specific main menu tiles or Octagon logo placement. It is abundantly clear from your feedback that integrating ads into the Replay and overlay experience is not welcome. The advertisements have been disabled by the team and we apologise for any disruption to gameplay that players may have experienced. We realise that this should have been communicated with players ahead of time and that’s on us. We want to make sure our players have the best possible experience playing EA Sports UFC 4, so ad integration in the Replay and overlay experience will not be reappearing in the future. Thank you for your continued feedback on EA Sports UFC 4."