There could be a new Tony Hawk game on the way 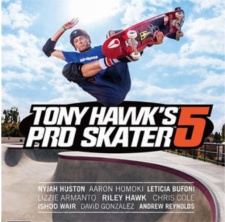 A new Tony Hawk game looks set for a 2020 release after a recent leak.

As revealed on Twitter (below), user TheNathanNS spotted a Facebook post by the punk-rock band The Death Set. The group claimed that it had "just licensed five new songs to Tony Hawk 2020. You'll be hearing this shit soon."

However, the Facebook post has since been deleted. Activision has neither confirmed nor denied the rumours. Tony Hawk Pro Skater 5 was released five years ago. It was launched to poor reviews and with the title not satisfied with the game.

Rumours have swirled regarding a new Hawk game for some time. As reported by Eurogamer in 2019, pro skater Lizzie Armanto – when discussing her appearance in Pro Skater 5 – said "[Hawk is] coming out with another one, and I'll be in that too."

Industry leaker Sabi also took to Twitter around that time, the revealed that remastered prototypes of Tony Hawk Pro Skater 1 and 2 had been played internally at Activision. However, it is unknown if the games were being developed into full remasters.

But this also seems like a major NDA breach. pic.twitter.com/gGUiNZL6i8