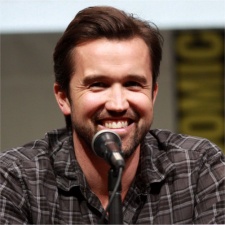 Former Minecraft Movie director Rob McElhenney (pictured) has explained what happened to his version of the film.

Speaking on the Happy Sad Confused podcast, the It's Always Sunny in Philadelphia creator claimed that when Toby Emmerich took over from Greg Silverman as the movie boss for Warner Bros. his film "slowly died on the vine."

A long time fan of the franchise, McElhenney pitched his idea for the film and received a $150 million budget.

"I don't harbour any resentment. I get it. I get the way that it works," McElhenney said.

While he doesn't hold a grudge against Warner Bros, the director did claim it was difficult to lose the project after two and a half years of work.

Part of why McElhenney was excited to tackle the film was that there is no fixed narrative in Minecraft. It offered more creative freedom than other movies based on games.

"I thought one of the greatest assets to Minecraft was they didn't have a fixed narrative. It was an open-world experience," said McElhenney.

"All you were essentially give was the building blocks to do whatever you want. I thought, what an amazing tool, much like Legos except now you're talking about infinite possibilities because it's digital, to give to kids - and not just kids, but any person who feels powerless.

"Kids mostly feel powerless, all day long they're being told what to do, how to dress, do your homework, go to bed. I felt like that could extend to other people. I think everybody feels marginalized to an extent. Your boss is telling you what to do all day long, or your spouse is. You just feel like you don't have this sense of agency over your own life. The game gave you that, and I thought that's a really profound experience."

Warner Bros. chose to replace the director with Peter Sollett - known for Raising Victor Vargas - in January 2019. As of April 2019, Mojang's title has been purchased 30 million times on PC.

McElhenney has managed to get a live-action video game project out of the door in Mythic Quest, a co-production with French publisher Ubisoft.