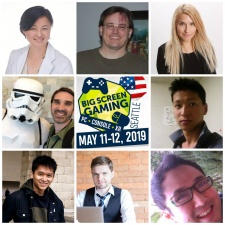 This event will see five tracks and 30 speakers covering a range of topics from design and development, the future of the market, modern marketing and publishing success, and top UX design.

We’re excited to reveal more details about the show in the coming months, so make sure you stay tuned.

But for now, here are your first speakers for Big Screen Gaming Seattle!

Just like Pocket Gamer Connects, we provide the very best speakers from some of the biggest companies in the world at Big Screen Gaming, and Seattle will be no different. We are delighted to announce that Bungie’s Project Lead for Destiny 2 Chris Gossett will be delivering a superstar session and will share his expert insight and experiences in the games industry.

Rodrigo Scharnberg, Business Developer & Executive Producer of Rockhead Games looks at free-to-play vs premium on console. By drawing from their own experiences, Scharnberg will discuss which model to use in your own games.

RocketRide Games’ Business Development Manager Michelle Brandstetter and Sharkbite Games’ CEO Rick Ellis feature on a panel which focuses on cross-platform publishing and whether it will increase game sales.

Kanoogi’s CEO Chris Taylor weighs up the discussion of whether browser tech is ready for gaming. Manticore Games’ Senior Creator Relations Lead David Chiu looks at the history and power of UGC.

"Many gaming panels that are presented by lawyers address the current trigger terms and hot regulatory topics such as eSports and loot boxes. However, at the core of all those discussions is having an actual game itself in order to be faced with those issues” - says The Pokémon Company International’s Senior Attorney Kathy Carpenter, as she shows you items to consider when game developers want to include visual representations of real word items in their games, drawing on her experiences on both production and legal teams clearing third party IP for worldwide use. Carpenter will also discuss IP fundamentals and risks to consider, the impact of the overall experience and immersion, and assurances that publishers want from developers.

Evolution and an incredible return awaits

Big Screen Gaming is the evolved version of our previous PC Connects events, which you saw last year in Seattle, and it brings console and XR gaming into the fold as well as PC. It joins Pocket Gamer Connects, the staple figure of the Connects international series of events for the games industry, as we make Seattle our home in the States.

Overall, the two-day event will cover mobile, PC, console, XR and blockchain gaming, with 750 industry professionals all around the world in attendance to see 180 speakers deliver their expert insight on a total of 17 jam-packed conference tracks.

Make sure you grab your ticket now and save up to $275 with our Early Bird prices for Big Screen Gaming and Pocket Gamer Connects Seattle! Book now!

Learn about the future of the market with 2020: A Games Revolution at Big Screen Gaming