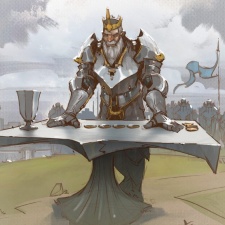 Another day, another new announcement from League of Legends studio Riot Games.

The firm has announced a new tabletop game publishing arm - imaginatively called Riot Tabletop - which is working on a title called Tellstones: King's Gambit right now. This follows Mechs vs. Minions, which was the company's first foray into tabletop gaming three years ago.

"We’re gamers. That means more to us than just video games," Riot wrote.

"You can tell by the piles of board games, miniatures, and roleplaying books stashed around the office. So it was natural to explore what would happen if we brought the Riot perspective to tabletop games. We call it Riot Tabletop."

The company continued: "Our first tabletop game was a huge, cooperative game loaded with miniatures and narrative content.

"Our second game is competitive, much smaller, and plays faster. They're worlds apart, but united by the focus on player experience outlined above."

This follows League of Legends turning ten and Riot announcing a whole load of new games, some based on MOBA and some brand new IP altogether. It also comes in the wake of a damning Kotaku exposé about the studio's working culture.

Riot Games is reworking the League of Legends client