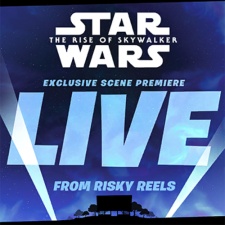 A new slice of the upcoming Star Wars film The Rise of Skywalker will apparently be debuting in Epic's Fortnite next week.

That's according to leaker ShiinaBR, who revealed the news via Twitter (below), saying that a new scene from the forthcoming sci-fi blockbuster would be shown on Saturday, December 14th at the Risky Reels in-game location. Director JJ Abrams will also apparently be making an appearance.

This would be far from the first in-game event in Fortnite that has dipped into mainstream popular culture. Epic featured Marvel Cinematic Universe big bad Thanos in the build-up to Avengers Endgame.

The firm even held an in-game concert with DJ Marshmello in February of this year to close off the seventh series of Fortnite. That brought in a crowd of around 10.7m people. Oh, and John Wick also made an appearance in the summer, which was a little odd given that Fortnite is rated PEGI 12 here in Europe and Keanu Reeves' - admittedly amazing - action series are all intensely violent and rated for viewers older than, um, 15.

There will be an EXCLUSIVE SCENE PREMIERE of Star Wars: The Rise of Skywalker at Risky Reels!!