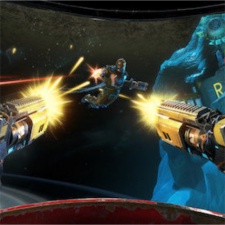 French publishing giant Ubisoft has decided to not release the non-VR version of its title Space Junkies.

In a blog post on the game’s site, developer Ubisoft Montpellier revealed that it was cancelling the ‘regular’ version of Space Junkies following an open beta which came to a close on August 28th. No reason has been given as to why.

“While this is the end of our journey in terms of development of the game, the team is proud to have achieved what we set out to do: create a fun and fast-paced competitive FPS in VR,” the studio said

The company is keeping the servers up and running for the VR version.

“The game servers will remain open and accessible to players who purchased the VR version of Space Junkies so that Spacers can continue to take on each other in the many community tournaments we’ve seen since launch,” the team wrote.

The French firm is still developing virtual reality title and is currently looking to hire a senior game designer for a VR project as revealed on its website.

“We are creating a brand-new team to work on an unannounced triple-A VR project. You will work on cutting-edge VR technology, on one of Ubisoft’s great IP’s, developed across multiple studios. Join us today to shape the future of VR,” reads the job description.