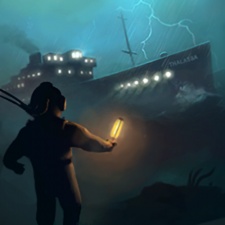 Modern games aren’t afraid to present players with all manner of mysteries, but it’s really those tackling more serious subjects that tend to stick with us the longest.

This is something Norway-based developer Sarepta Studio knows a thing or two about, having made a habit of shedding light on sensitive themes with releases like Shadow Puppeteer and the BAFTA award-winning My Child Lebensborn. This same time, care and attention is now going into its next title, Project Thalassa, a new first-person PC game which aims to explore the depths of trauma.

Project Thalassa is a psychological drama which tells the story of a deep-sea diver seeking to uncover the mystery behind their sunken shipwreck. Although it's still a long way from launch, the developer recently released a teaser trailer for the project which hints at the game's emotionally charged, psychological themes.

Sarepta Studio has a great track record for putting out emotionally impactful and atmospheric games. This was formally recognised by the industry back in 2019, when the developer won the BAFTA ‘Games Beyond Entertainment’ category for its work on My Child Lebensborn, earning praise for its smart approach to the tricky topic of children of war. And now with Project Thalassa Sarepta Studio is already hard at work consulting with trauma psychologists and veteran deep-sea divers to ensure that mental injury is handled precisely.

Project Thalassa is still very much in the early days of development, but those eager to learn more about the project can look forward to Sarepta Studio CEO Catharina Bohler talking more about the developer’s work during Devcom in Germany next week. Here Catharina will reveal more about what to expect from Project Thalassa, as well as what it's like to work on games that dive deep into complex themes. Soon after Sarepta Studio will also be doing a Twitch stream with ColorfulMartian, on Friday 16th August, where members of the public can ask questions and potentially win the first official Project Thalassa merch.

If you’d like to stay up to date with development, be sure to visit Project Thalassa’s official game page.

INSIGHT: How Xsolla helped increase sales and slash fraud for MMO Lord of the Rings Online