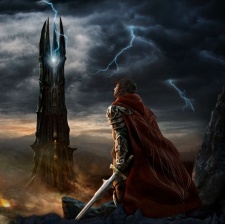 Amazon Game Studios has revealed that it has partnered with Leyou and Middle-earth Enterprises for a new game based on The Lord of the Rings.

The title in the works will be a massively multiplayer online role-playing game set in the world created by J. R. R. Tolkien. The game will be published on PC and console.

Amazon is currently in production of a live-action Lord of the Rings television series, however it's unclear whether these two projects are connected.

No official title or release window was given for the game at the time of writing.

“We’re committed to bringing customers games of the highest quality, both with our own original IP as well as beloved cultural pillars like The Lord of the Rings,” said Amazon Game Studios VP Christoph Hartmann.

“Tolkien’s Middle-earth is one of the richest fictional worlds in history, and it gives our team of experienced MMO developers – from the same studio developing New World – tremendous opportunity to play and create. We have a strong leadership team in place to helm this new project, and we’re actively growing our team to help build this incredible experience.”

Leyou subsidiary Athlon Games confirmed the studio was working with Amazon on a free-to-play Lord of the Rings MMO back in September 2018.