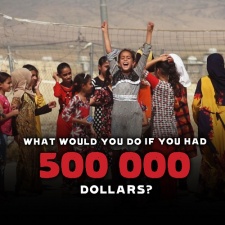 This War of Mine developer 11 Bit Studios has raised $500,000 for the UK-based conflict relief charity War Child.

The funding was raised through a partnership starting in 2014, with 11 Bit creating Charity DLC in collaboration with War Child that added war-themed works of graffiti by world-famous street artists. 100 per cent of the proceeds raised by this content went to the charity’s operations in supporting children affected by conflict around the globe.

Yesterday, the developer announced via Steam community announcement that the collaboration has raised over $500,000 for charity.

The two organisations have also put together a video (below) demonstrating how the half a million has been put to use across various war-torn countries.

This War of Mine frames itself around regular people surviving in the midst of a nameless conflict ravaging their city. The money raised by the collaboration will go towards War Child’s operations in countries like Afghanistan, Iraq, the Central African Republic, Democratic Republic of Congo and Yemen.

So far, the charity has been given funding to provide opportunities like early childhood and care development to 840 children in the Afghan cities of Kabul and Herat, alongside foster care for 26 unaccompanied children in the CAR city of Bambari.

Donations have also supported War Child’s new fundraising arm aimed at working with gamers, which has raised over $2.5 million to dates.