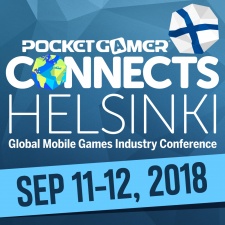 Pocket Gamer Connects Helsinki was yet another record-breaking edition of the hugely popular PGC conference series that takes place multiple times each year around the world.

This year alongside Pocket Gamer Connects - which brought together the world’s mobile games industry in one location to share knowledge, make deals and network - we also hosted Blockchain Gamer Connects in the city for the first time.

And not to forget other important sectors like PC and Nintendo Switch - we also had a dedicated Connects X track to offer deeper insights into these key platforms.

In total more than 1,300 delegates attended this year’s Helsinki event on September 11th to 12th - making it our biggest ever event on mainland Europe.

Over 620 companies were represented, as were 49 different nationalities, creating a conference that represented a true cross-section of the industry at large.

More than 2,800 Pitch & Match meetings took place throughout the two-day event, enabling publishers, developers, investors and more to connect with each other and get the ball rolling on the big deals.

We’ll no doubt see the fruits of this over the next year. Don’t believe us? UK publisher PlayStack first met Finnish developer Hisome at PGC Helsinki 2016 - and the former recently acquired the latter.

It wasn’t just the Pitch & Match where people got talking though. We of course had our regular SpeedMatch session that enables shortlisted developers, publishers and investors to make initial contact.

And then there was the infamous Global Connects Party which saw hundreds of attendees gather to network. And drink free booze. Probably.

Over on the conference sessions we had a crazy 200 speakers on hand to deliver talks and panels across 16 tracks over two days, from the Monetiser and Developer Toolkit tracks to Game Changers: Hypercasual, Trade Trends, East Meets West, Blockchain Basics, Live Ops Landscape and more.

Then of course we had the Very Big Indie Pitch and PC Indie Pitch, where dozens of indies gave quickfire pitches on their latest games. You can see the VBIP winners here and the PCIP winners here.

On top of that, there was the third annual Pocket Jam, a game jam that took place over the two days of the conference. 10 games were developed in that time around the theme 'chain reaction'. You can check out the games right here.

"I was absolutely delighted by our biggest and best PGC Helsinki yet - we had the most delegates, speakers, sponsors and meetings ever in this our fifth year,” said Steel Media CEO Chris James.

“It was a truly diverse event too, although mobile remains at the heart, we covered multiple topics from hypercasual to triple-A PC/console ports, had a sizeable PC and XR presence and of course a sizeable crypto contingent as part of our first Blockchain Gamer Connects Helsinki.

“Crucially, despite the scale, the event managed to create the same genuine good-natured atmosphere of information sharing, practical business and fun that we always aim for - ultimately we're all part of the same big games family and pulling in the same general direction to make this industry more awesome!

"Huge thanks to our incredible team, all our sponsors and most of all the attendees who came along, engaged and made the event so special! Look forward to seeing you all again soon, how are you fixed for London on January 21st to 22nd 2019?"

Didn't get a chance to attend the show? We'll be uploading the talks to our YouTube channel over the next few weeks. You can also check out our event coverage here.

Our next big conference will be at Pocket Gamer Connects London 2019 on January 21st to 22nd. If you register before September 21st you can grab the Super Early Bird rates.

Schedule live for Pocket Gamer Connects Helsinki event, check out who is speaking from PC