Suda51’s cult classic Killer7 is coming to Steam this year 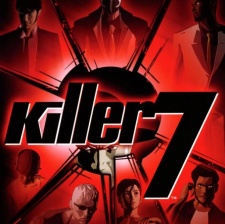 Grasshopper Manufacture has announced that Killer7 is being remastered for launch on Steam this fall.

The remaster of Suda51’s 2005 stylish thriller was announced by Grasshopper during a panel at Momocon. The Steam version is a collaboration between Grasshopper and Engine Software, with NIS America publishing in place of Capcom. A Steam page for the title is up, but notably lacking in system requirements.

Grasshopper told Game Informer that this edition of Killer7 is less remake than it is a “graphical refresh”. The developer states that the bold colours and simple models scale nicely with modern resolution screens. The Steam version of Killer7 will also include full mouse and keyboard support.

Eagle-eyed fans noticed that certain scenes in the announcement trailer for Killer7 may have been running on an emulator. The final gameplay shot of the trailer appears to show the framerate counter for Dolphin, a gamecube emulator.

Killer7 first released in 2005 for Gamecube and Playstation 2. While not a smash success, the weird title gathered something of a cult following. The Steam edition is set to launch sometime this Fall.

Check out the trailer below: