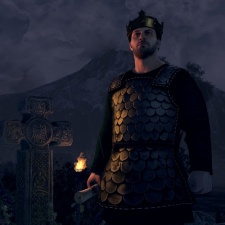 Total War Saga: Thrones of Britannia scraped into the top ten with pre-orders last week, and a May 3rd launch saw Creative Assembly’s latest jump up to second place. Frostpunk maintains a strong showing at No.3, while Battletech sees a slightly larger slip down to sixth place.

Stardew Valley’s multiplayer beta opened up at the end of April. The opportunity to finally farm with friends has brought attention back to the title, seeing it shoot up to the no.4 spot. It’s likely that many existing owners will have brought friends to the game for the first time, boosting sales.

After four years in early access, The Forest launched into v1.0 at fifth place. Developer Endnight Games isn’t sitting on their launch, with mention of “heavy” future support starting with a VR update later this month.

Far Cry 5 continues to drop slowly from fifth to eighth, while NieR: Automata likewise dropped three places, landing at No.7 this week.

Closing off the list is Beat Saber, a VR title from Hyperbolic Magnetism. Word of mouth has carried Beat Saber well, with stylish gifs of rhythmic sword-slashing spreading well across social media and into the charts.

Below is the Steam Top Ten for the week ending May 5th.