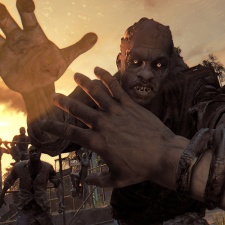 The Steam Spring VR sale might have kicked off last week but virtual reality does not make an appearance in the Top Ten this week.

Dying Light is back in the Steam ranks this week, coming in at second place thanks to some price activity.

The Enhanced Edition of Techland's massively popular zombie parkour tile was discounted during the week, which will no doubt have contributed to its success. That, and the fact that the Polish studio has done a stand-up job of supporting the title with new, free content since its 2015 - yes, three years ago - release date.

The upcoming Bad Blood battle royale-esque update will no doubt help Techland's game reappear in the Top Ten in the near future.

The zombie title pushes Ubisoft's Far Cry 5 to third place after a few weeks in No.2 and one at the top spot. This has been by far the most successful entry in the series to date, and on launch was the second-best launch the French publishing giant had ever had.

Speaking of Ubisoft, Ghost Recon Wildlands charts in fifth place, likely driven by the announcement of new content coming for the open-world war-against-drugs-em-up. That includes a mission featuring Splinter Cell protagonist Sam Fisher, which has no doubt turned heads.

The Windows Edition of Final Fantasy XV drops two places to No.6, while Counter-Strike: Global Offensive holds tight at in seventh place.

Ninth position goes to Darkest Dungeon from Red Hook Studios. This Lovecraftian horror title returns to the Top Ten off the back of price activity.

Here is the Steam Top Ten for the week ending April 21st:

How Techland learnt to run Dying Light as a service