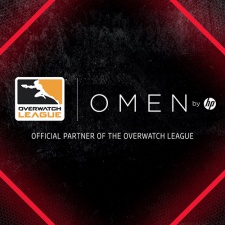 One of the top sponsors of the Overwatch League, HP's Omen brand, has said that the recent spate of bad behaviour from pro-players does make it nervous.

Speaking to PCGamesInsider.biz at GDC 2018, product manager John Ludwig said that advertisers are always going to get nervous when their name is associated with a brand having its share of bad news.

Clearly not something a company wants to have their branding associated, but the marketing man went on to say that there are going to be growing pains with a burgeoning industry like pro-gaming and that there needs to be a focus on education. To Blizzard's credit, players have been facing penalties for breaking the rules.

"Of course it makes us nervous. Every sponsor gets nervous whether it's professional athletes to esports players," Ludwig said.

"Everyone always gets nervous. We don't condone it all. But a lot of these players are kids, very young, and there are going to be growing pains. Compared to sponsoring something that's been around for a long time, there's going to be a difference. Again, these are kids, a lot of them are 18 and 19. They haven't learnt maybe some of the things they should know.

"You see this stuff with professional athletes, too. Across HP, we sponsor a lot of different things. This stuff is always an issue. The best we can do is education. People get suspended and learn from it then don't do it again."

Omen by HP announced it was the official PC partner of the Overwatch World Cup back in June 2017, with its top tier Omen X desktops being used by players during the pro-gaming tournament, before in November signing up alongside Intel for the Overwatch League.

“Working with Blizzard Entertainment as a global technology partner of the Overwatch League is the perfect way to celebrate esports talent and showcase our hardware within the competitive gaming arena,” global head of marketing for personal systems at HP Alex Craddock said at the time.

“Omen hardware has been widely adopted by many of the world’s top esports professionals, and we’re thrilled to help power the gameplay for the Overwatch League.”

The Overwatch League has been massively successful, bringing in a whopping ten million viewers in its first week.