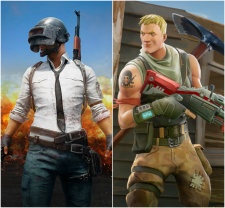 The data and research firm reports – as part of its PC Game Tracker – that 16.3 per cent of the core PC games audience played Fornite last month, PUBG Corp's title coming in with 14.6 per cent of the market.

Fortnite is free-to-play, where Playerunknown's Battlegrounds is premium which is certainly a factor in this divide.

Newzoo blames this engagement on new content roll-outs; Fortnite put out four patches in February with new goodies, where PUBG's recent updates are to do with tweaks to the game including – yes – anti-cheating measures.

Furthermore, Newzoo's Game Streaming Tracker shows that – when you take out esports viewing – Fortnite was the most-watched game on Twitch and YouTube Gaming for the month, per similar reporting from our sibling title InfluencerUpdate.biz.

Looking geographically, Fortnite is bigger in Europe while PUBG reigns in Asia. Just under half of Playerunknown's Battlegrounds is from China, which is likely driving this figure. Newzoo also reckons that Fortnite's more casual and colourful look is a factor in that game's success, too.

In terms of hours played, Riot's League of Legends comes out on top, with Minecraft from Mojang coming in at second place.

Blizzard's highest ranking game was Hearthstone, in third place, but the publisher also takes seventh and ninth places with World of Warcraft and Overwatch respectively.

Fortnite was fourth, with PUBG at sixth.

Report: 30 per cent of PC gamers around the globe played a battle royale game in February