PC version of Hawken is being pulled 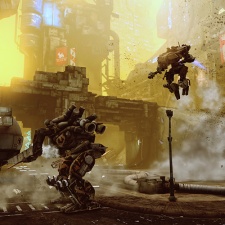 Free-to-play mech title Hawken is coming to an end on PC.

In a post on the game’s Facebook page, developer Reloaded announced that it would be closing the PC servers for Hawken in order to 'refocus' its efforts.

Furthermore, the game and all downloadable content would be removed from Steam on January 2nd, 2018.

“It’s been an incredible journey since the introduction of Hawken on Steam, back in 2014,” the studio wrote.

“The game’s success has been largely due to your continuous support. The Hawken community has been the cornerstone of this ever-evolving franchise.

“It’s been an incredibly rewarding experience working alongside such a dedicated PC player base. Your feedback and support has been invaluable to us, and the team looks forward to creating more great games based on what we’ve learned from you.”

Hawken was announced back in 2011 by developer Adhesive Games, with Meteor Entertainment stepping in to take on publishing duties.

The IP was purchased by APB: Reloaded publisher Reloaded Games in 2015, with the firm bringing the mech title to console.