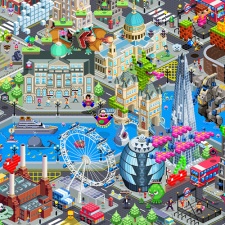 After two successful years, London Games Festival is returning for 2018.

The Mayor of London-backed initiative is coming back between April 5th and 15th, with organiser Games London announcing that last year’s Festival brought in 50,000 attendees.

Furthermore, since launching in January 2016, Games London says it has connected 145 games firms with 109 investors from around the world, as well as driving £30m into UK companies.

London Games Festival 2018 will once again feature the Games Finance Market, which connects games firms with investors, the Now Play This showcase of experimental game design at Somerset House, EGX Rezzed and the BAFTA Game Awards.

“London leads the world in culture, creativity and technology and the city’s games industry plays a major part in that success,” Mayor of London Sadiq Khan said.

“In just a couple of years, the London Games Festival has become a major attraction for consumers and professionals alike and Games London is delivering significant investment for our cutting-edge tech sector – showing that London is open to creativity and innovation and open for business.”

[Disclosure: writer of this piece used to work at Games London as content editor for events and marketing during London Games Festival 2017]

You have until Thursday to save on Pocket Gamer Connects Seattle 2019 tickets - buy now to save big!