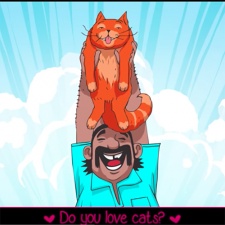 UK indie studio Bae Team has revealed that its cat dating title Purrfect Date is coming to PC and Mac at the end of the year with the help of Bossa Studios.

The visual novel title is coming to PC later this year. Purrfect Date is the work of Bossa Studios’ content produce, Oliver Hindle, and his partner, Mae Roberts. It launched into Steam Greenlight before Bossa stepped in to publish the title.

“Oliver and I were lazing around one day, itching to play a game, but nothing really grabbed our interest, so we started talking about what we’d do if we could make the ideal game for us,” Roberts said.

“Cats, intrigue, dating sims, the TV show Lost… all of these things became the ingredients that went into making Purrfect Date. It’s an amalgamation of everything we love, and in essence, a love letter to each other (and cats).”

Bossa Studios co-founder Imre Jele added: “We love to create games in ways that other developers, studios and publishers would shy away from. At Bossa we embrace crazy ideas from the team, and when Oliver said he was working on a dating simulator about cats, we knew it was something we would support.”

Given the success of dating and relationship sim titles like Dream Daddy and Ladykiller in a Bind, it’s clear there’s an audience for this sort of game on Steam.

Here's a trailer, complete with an annoyingly catchy song about humans dating cats.