Controversial game House Party is back on Steam 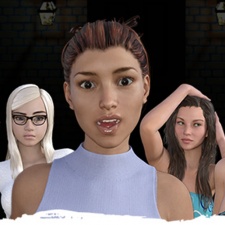 After its removal last week, sexually-themed game House Party has made a return to Steam.

After speculation that Eek Games’ House Party was removed for its uh…. questionable content – such as blackmailing women into having sex with you – it turns out that Valve only had an issue with the depiction of sexual acts.

The title now has its censored mode on by default, though Eek has also released a patch to remove the literal censorship bars.

“I’m sure everybody’s wondering about the changes that had to be made to the game in order for this to happen,” the developer wrote on its blog.

“I’m happy to say that the entire story of the game is 100% in tact, and there have been no changes made to the content of the game. The issue was specifically with the portrayal of sex acts. I know a lot of people are coming down hard on Steam for this, but it was expressed to me during the course of my exchange to them that they are also held to rules and regulations of their own, and they are just trying to do the best they can. They were very happy to be able to restore the game on their platform. Probably not as happy as me, but close.”

“Now, I know that there are many of you who take issue with the fact that you bought a non-censored game, and now aspects of the game are censored. There doesn’t seem to be any issue with providing an off-Steam patch to users to restore the game to its original form as many other games so overtly do, so we will be releasing a small and easy to install patch that you can apply to your game. It’s the best that we are able to do given the current situation, and we hope our Steam players understand. It’s not ideal, but the alternative was that we would not be able to return to Steam, and if the game doesn’t grow, it makes it harder for us to hire on and make the game better.”